NEARLY 400 beagles bred for experiments at a huge puppy mill in Vermont were killed during a series of sickening tests or died amid cruel conditions, according to a new report by PETA.

The shocking discovery was reportedly made by the US Department of Agriculture (USDA) following an undercover investigation at the facility in Cumberland, which is owned by Envigo, and supplies beagles to labs around the world for use in experiments. 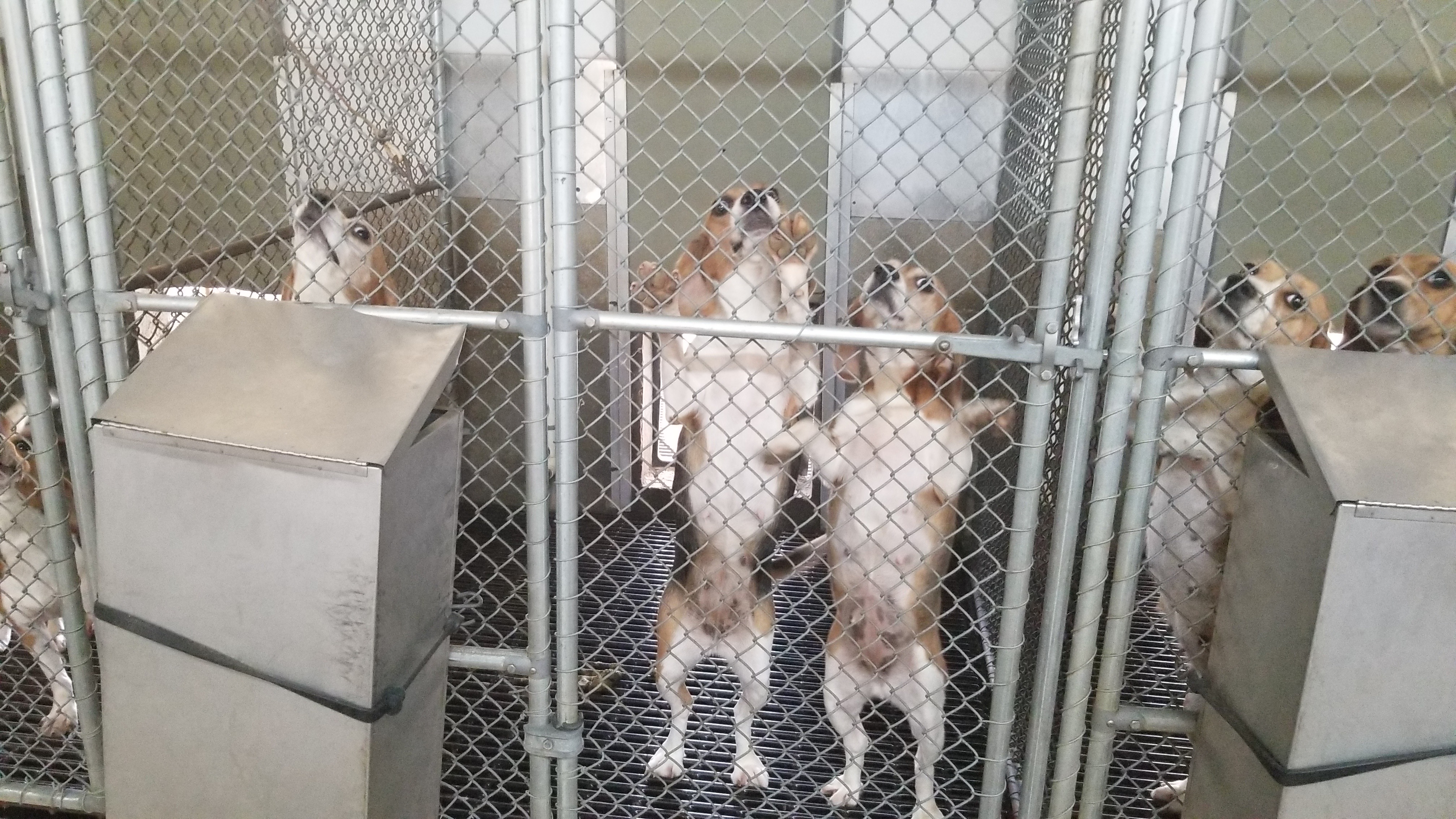 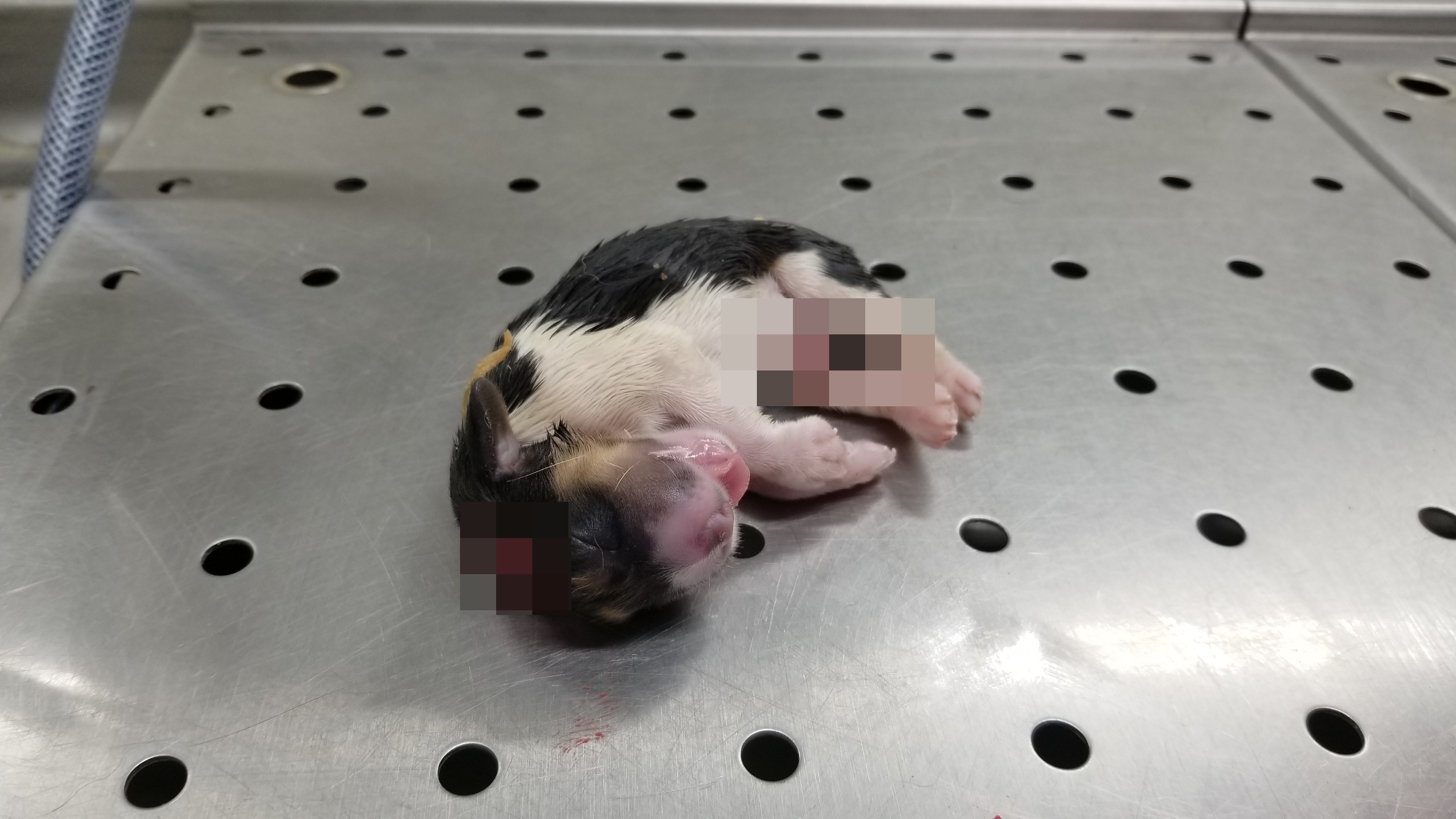 According to PETA, 5,000 beagle dogs and puppies were intensively confined to small, barren kennels and cages 24/7 at the breeding mill.

They reportedly had no beds, no toys, and no stimulation, and were kept in sheds that stretched as long as a football field.

Noise levels inside the mill reportedly topped 117 decibels, which is louder than the average rock concert, as hundreds of the distressed dogs barked at once.

The cruel and crowded conditions, according to PETA, caused the animals to fight one another – often resulting in injury.

Female dogs, who are reportedly bred repeatedly for years, were also allegedly forced to give birth alone on the hard floor.

"A supervisor found one pregnant dog afflicted with a fever. The next day, a worker found her 'dead—like stiff as a board,' with 'two puppies in her and … they had torn through her uterus [and] were just kind of floating around in her abdomen,'" PETA's report reads.

"So all like … the afterbirth … was all … in her stomach. And I think that just led to a massive infection.”

Across the course of just a few days, USDA investigators reportedly found more than 350 puppies dead among their live siblings and mothers.

Some of those puppies were said to have been found crushed to death by their mothers inside the cramped cages.

"Others suffered from hydrocephalus (in which fluid builds up inside the skull and puts pressure on the brain), were eviscerated, or just couldn’t survive the harsh conditions," PETA reports.

In one disturbing alleged incident, an investigator secretly working with PETA is said to have found a puppy whose body had been split open, was rotting, and "smelled rancid" in a cage with other dogs and its mother.

A worker reportedly told the investigator, "That puppy’s probably been in there since Friday.”

Other dogs reportedly fell through gaps in the cages or ended up becoming trapped in drain pipes. Often they would not survive, PETA says.

"PETA’s investigator brought one such puppy to a supervisor and the site manager, who responded, 'S**t,'" the non-profit's report reads.

"As staff discussed putting the puppy in with a nearby nursing dog, the site manager said of dogs in the room, 'Honest to God, those f**kers are so close[ly] related … we’re probably not that far off.'

"The next morning, PETA’s investigator found the puppy dead," the report continues.

Also detailed in the report is a series of disturbing details about puppies allegedly being euthanized while still conscious via an injection straight into their hearts.

Calling it a breach of "veterinary guidelines", PETA said the newborn pups were "able to feel the needle penetrating their chest."

"After a worker denied that he needed to sedate one conscious puppy before putting her down, the puppy raised her head," the report states. 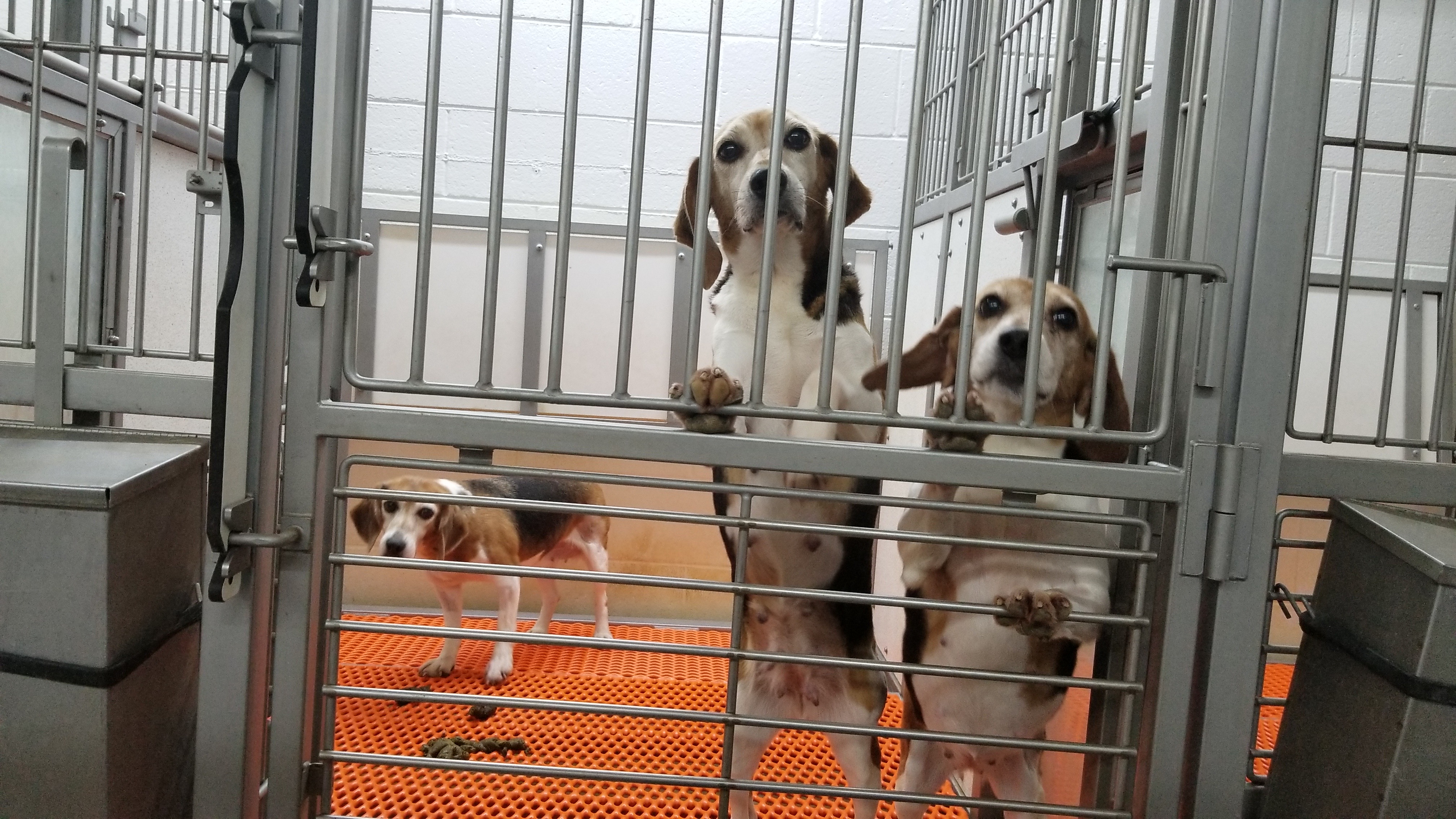 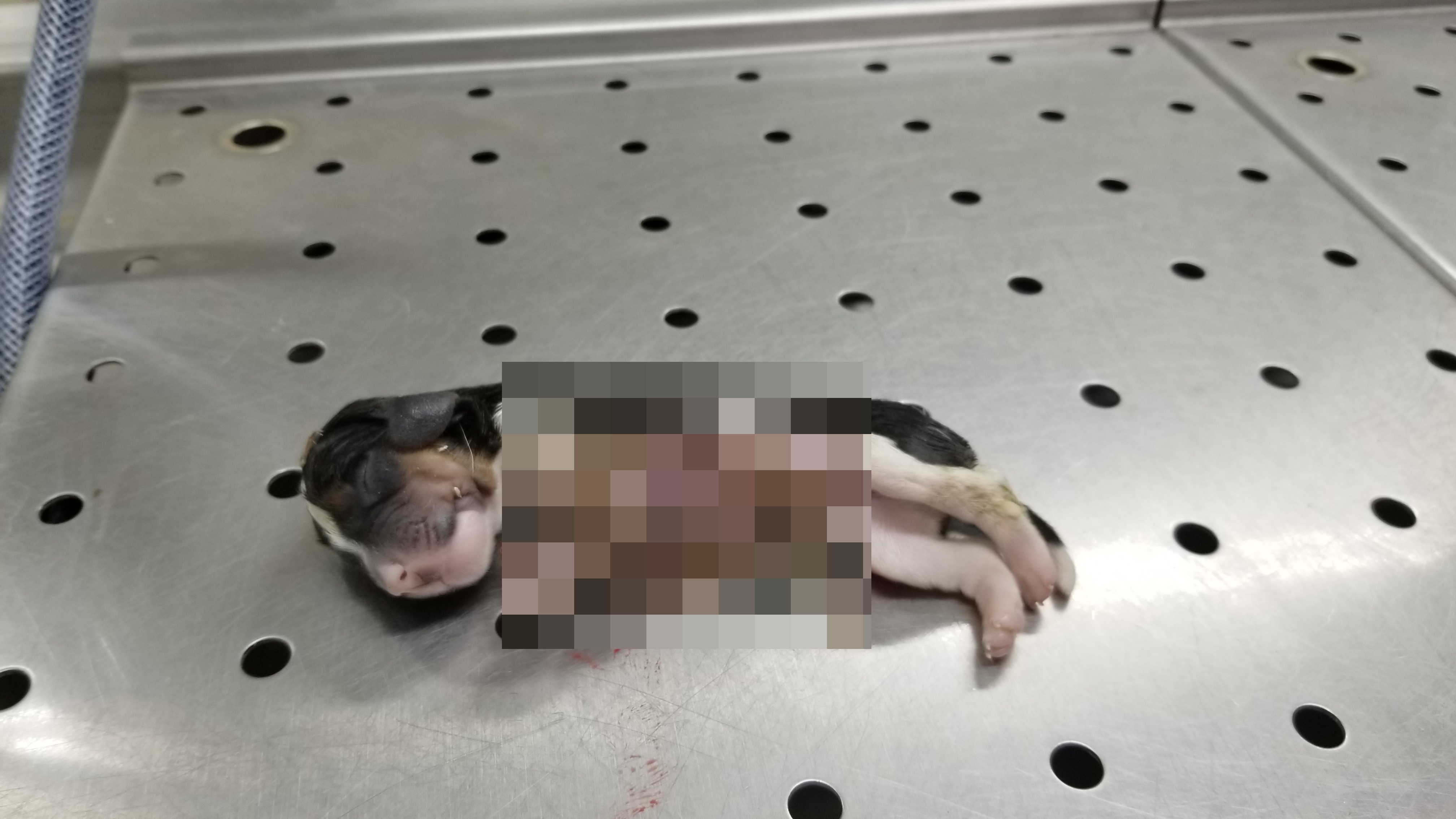 "When PETA’s investigator pointed out that 'she’s still … awake, the worker did not respond. He just put the needle into the animal’s chest and injected the solution.

"A supervisor was aware of this practice and knew that at least one worker engaged in it. Some workers did little—or nothing at all—to verify that animals were dead before putting them into plastic bags," it continued.

The report additionally charged that other workers with no veterinary credentials would attempt to diagnose and treat dogs when they fell ill.

In one horrifying incident, a supervisor allegedly inserted a needle directly into a puppy's head without anesthetic, in an attempt to drain fluid from the dog's wound.

The puppy is said to have cried out so loudly that the supervisor "tried to hold his mouth shut."

"Workers who were not veterinarians—or even veterinary technicians—cut prolapsed tissue off puppies’ eyes, stitched dogs’ prolapsed penises, and even cut puppies out of sedated dogs’ abdomens before putting the mothers down," the report claims.

"They were expected to perform 'necropsies' by cutting open puppies’ remains in an attempt to determine their cause of death."

“If the puppies at Envigo survive being born into a barren cage, blasted with a high-pressure hose, and being subjected to painful procedures, they’re sold to laboratories to be experimented on,” PETA Senior Vice President of Cruelty Investigations Daphna Nachminovitch told The Sun.

“These beagles experience exactly the same feelings of fear, pain, and loneliness as the dogs who share our homes can, and none of them should suffer in the experimentation business.”

Dogs from Envigo's mill have been experimented on at the FDA, Temple University, the Medical University of South Carolina, the University of Missouri, and Level Biotechnology in Taiwan, among other facilities, reports show.

PETA is calling on President Joe Biden to end animal experiments in the US and to fire the head of the National Institutes of Health, Francis S. Collins.

Envigo and the USDA have been contacted for comment but did not respond by the time of publication. 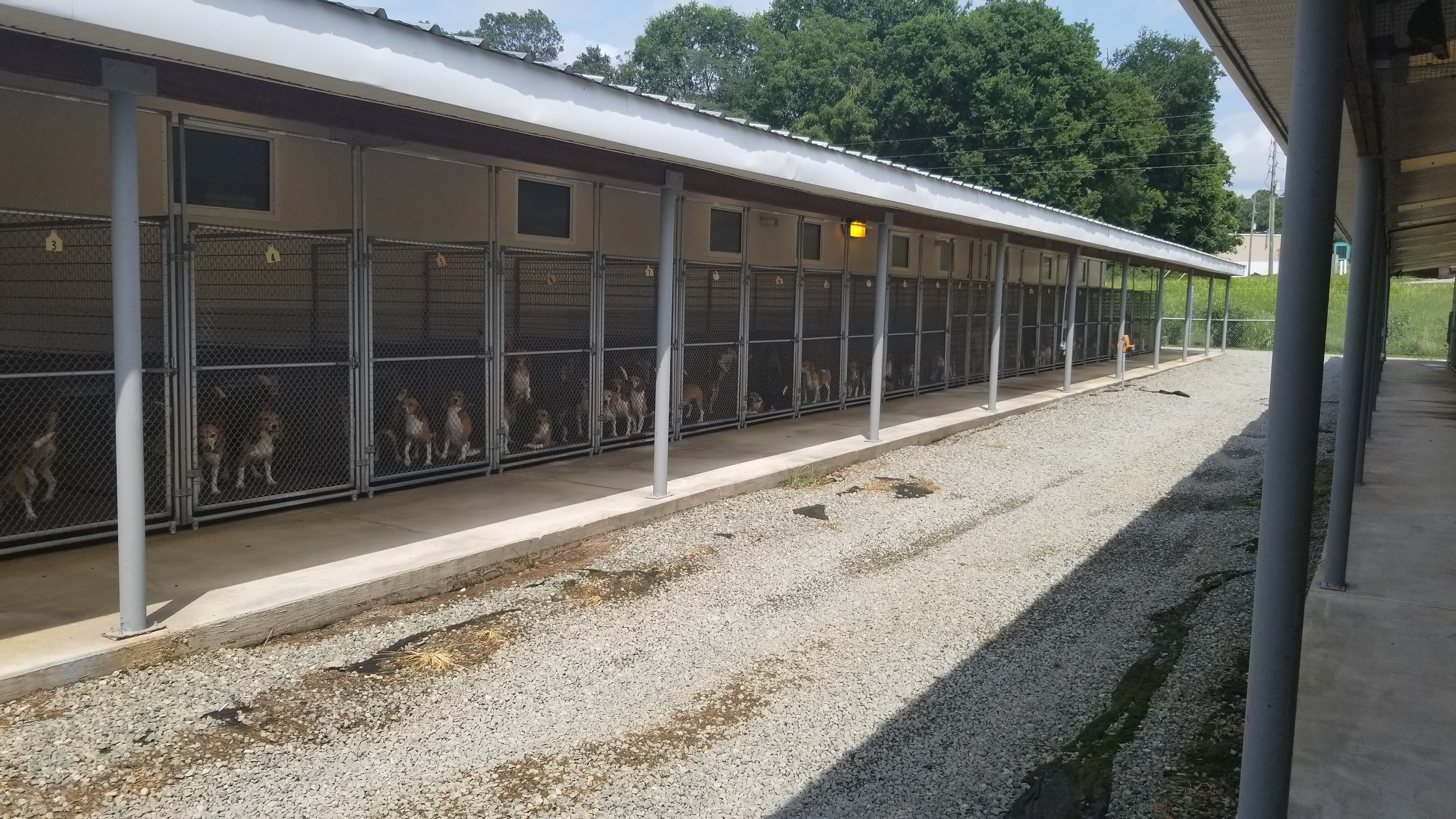