History repeating itself: Sisters tell of misery as they are forced to leave Ukrainian home… 28 years after they fled Georgia in fear of Russia-backed troops

For the second time in her life, Angela Dzahnoian has been forced to flee the horrors of war.

The lawyer, 35, originally from Sukhumi in Georgia, still remembers at the age of six hearing 20 masked Russian-backed separatists ransack their house in 1994.

She and her sisters, Diana and Liana, now 30 and 33, were getting ready for bed on that night. 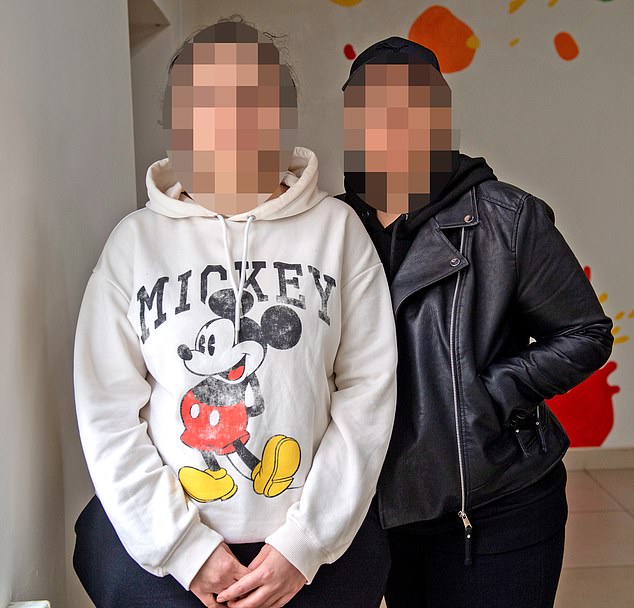 The lawyer, 35, originally from Sukhumi in Georgia, still remembers at the age of six hearing 20 masked Russian-backed separatists ransack their house in 1994

The incident haunts them and their mother Marina, 54, to this day. The next day, the family, which has Armenian roots, put their possessions into a car and drove to Ukraine.

Three decades later, the family saw history repeat itself as Angela and her daughter Amelie, seven, escaped from the Ukrainian town of Chaplynka, which has been under Russian occupation for much of the past seven weeks. She met her sister Diana at a drop-in centre for displaced Ukrainians in the southern city of Odessa which is safe for now.

‘Whenever we would go to buy food, the Russian soldiers would just steal it at checkpoints,’ she said. ‘At the start, local farmers would help by giving out produce. But their resources are exhausted. It is very hard to buy bread. The Russians do not allow aid to go inside.’

The single mother said she barely left her house because she was too scared of being shot.

She got out of Chaplynka on Saturday, with her sister Zhanna, 22, and her 10-month-old son Artem. ‘It was frightening with all the shelling,’ she said.

Twelve hours later, the four sisters ate together at Diana’s flat in Odessa. All of them are now naturalised Ukrainians and proud of their ‘homeland’.

Here’s how YOU can help: Donate here to the Mail Force Ukraine Appeal

Readers of Mail Newspapers and MailOnline have always shown immense generosity at times of crisis.

Calling upon that human spirit, we are supporting a huge push to raise money for refugees from Ukraine.

For, surely, no one can fail to be moved by the heartbreaking images and stories of families – mostly women, children, the infirm and elderly – fleeing from the bombs and guns.

As this tally of misery increases over the coming days and months, these innocent victims of this conflict will require accommodation, schools and medical support.

Donations to the Mail Force Ukraine Appeal will be used to help charities and aid organisations providing such essential services.

In the name of charity and compassion, we urge all our readers to give swiftly and generously.

TO MAKE A DONATION ONLINE

To add Gift Aid to a donation – even one already made – complete an online form found here: mymail.co.uk/ukraine

Via bank transfer, please use these details:

TO MAKE A DONATION VIA CHEQUE

TO MAKE A DONATION IN THE US

You can donate via CAF America at: https://donations.cafamerica.org/mail-force/