Britain is spending £7million each month storing excess PPE that may never be used by NHS staff, new audit figures show, as the Government vows to pursue firms who overcharged for the protective equipment at the height of the Covid pandemic.

Billions of PPE items remain unsuitable for frontline use and there were ‘inconsistencies’ between the volume of PPE ordered and what the Department for Health and Social care received, a National Audit Office report found.

Among the damning findings from the spending watchdog include the fact 1.5billion items of PPE are being held in storage that have passed their expiry date, with the DHSC incurring penalty charges of almost £500m for storing PPE in containers longer than anticipated.

More than half of VIP fast-lane contracted suppliers – firms recommended by ministers, MPs and government officials – had provided unusable items.

And the department is continuing to manage 176 contracts, whose supplies and quality of PPE have been disputed by the government, which carry a risk to an estimated £2.7bn of taxpayer-backed funds, the NAO adds.

A cross-party Commons committee has since urged health officials to ‘get a grip’ on the PPE contracts, while minister Jacob Rees-Mogg says the government will ‘be after’ any cowboy companies who hiked prices at the onset of the pandemic.

It comes amid claims at least one firm allegedly sold Whitehall personal protective equipment ‘at three times the price’ they bought it for. 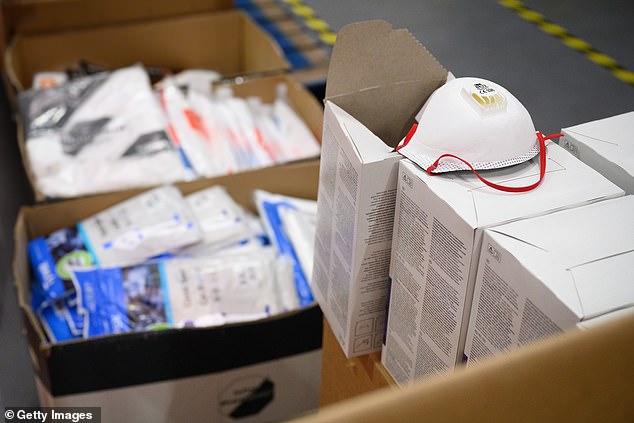 Shocking new figures reveal Britain is spending £7million each month storing excess PPE that may never be used by NHS staff, while billions of pounds worth of taxpayer-backed cash remains at risk. [File image] 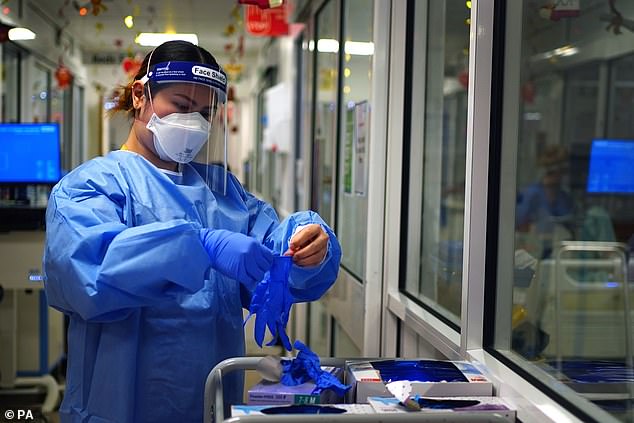 Billions of PPE items remain unsuitable for frontline use and there were ‘inconsistencies’ between the volume of PPE ordered and what the Department for Health and Social care received, a National Audit Office report found

Britain’s taxpayers are continuing to foot the bill for masks, gowns and gloves procured more than two years ago, after it was revealed last month that almost £9bn had been wasted on personal protective equipment during the pandemic.

Previous reports provided an eye-watering illustration of the scale of waste, as much of the Covid kit procured at the start of the pandemic was faulty or never used before its sell-by date.

Other problems included failed quality tests, face masks ordered with the wrong loops and gowns that were the wrong size or sent in the wrong packaging.

Ministers paid hugely over the odds and were left with equipment that later crashed in value. In all, £8.7billion has had to be written off by the Department of Health and Social Care.

Around 50million FFP2 masks produced by Ayanda, which won deals worth £253million, were not ultimately distributed as they had ear-loops rather than head-loops, meaning they were unlikely to fit tightly enough.

The company said it delivered according to its contract.

Miami jeweller’s gowns had to be suspended

The use of ten million gowns, imported via Miami-based jewellery designer Michael Saiger, was suspended because officials put the wrong packaging specifications on the contract.

Officials are locked in a legal battle with Pestfix, a pest control company based in West Sussex, after a batch of tight-fitting FFP3 masks failed quality tests and six million aprons were rejected for use by the NHS because they were the wrong size.

The company delivered its batch of IIR masks, two million gloves and other products to the contracted standard.

At the height of the pandemic an RAF flight was sent to pick up a shipment of 400,000 Turkish gowns, supplied by Selegna, which turned out to be useless.

Tory peer Michelle Mone has been accused of using her position to help PPE Medpro win a £203million contract, despite her and her billionaire husband having close links to the company.

Case of PPE resold for £5

A box of 250 items of PPE produced by Clandeboye Agencies, a sweet wholesaler based in Northern Ireland, cost the taxpayer £1,000 but was resold in an online auction for just £5.

Clandeboye insisted it delivered what was ordered at a competitive price.

A million masks supplied by Polyco Healthline for intensive care wards had to be recalled because they did meet safety standards.

Polyco said the product ‘narrowly failed’ because tests were only conducted on men.

Matt Hancock, then health secretary, made a series of recommendations to the ‘VIP lane’ for purchasing contracts including Monarch Acoustics, a furniture manufacturer.

The firm had just £41,000 in the bank before the pandemic, but its £29million PPE contract helped it increase profits by 4,700 per cent.

There are understood to have been no concerns raised about the quality of the products.

The latest analysis from Gareth Davies, chief auditor to the House of Commons, acknowledged the Department was required to ‘rapidly buy PPE in unprecedented circumstances’.

But he warned more than 150 contracts still managed by the DHSC ‘may not achieve full value for money, with an estimated £2.7bn at risk’.

Labour MP Dame Meg Hillier, chair of the Commons public accounts committee said: ‘The numbers are staggering – over 30bn items of PPE received so far with 5bn more on the way and 3.6bn items that can’t be used by frontline services.

‘Storage alone has cost over £700m, with DHSC continuing to spend £7m a month storing PPE it doesn’t need.

‘Whatever forbearance the taxpayer may have had at the start of the pandemic, this will quickly wear thin if DHSC can’t now manage the consequences.

‘The department must urgently get a grip of its PPE stocks and focus on protecting value for taxpayers. It has to claw back contract costs where it can, get rid of unusable PPE, and cut down on expensive storage.’

The NAO’s report stated of PPE which has been received, 17.3 billion items (55 per cent) were sent to frontline staff, but 14.1 billion items – worth £8.5bn – remain either in one of 50 warehouses, with suppliers, or in shipping containers.

By November 2021 it had cost the DHSC £737m to store PPE, with £436m of that coming under penalty charges because health bosses failed to move the items out of shipping containers in time.

It comes as Jacob Rees-Mogg today warned the Government is after ‘anyone who has overcharged us’ when asked about a company allegedly selling Whitehall personal protective equipment (PPE) ‘at three times the price’ they bought it for.

Mr Rees-Mogg’s comments came as shadow Cabinet Office minister Rachel Hopkins told the Commons: ‘We know they handed hundreds of millions of pounds of our money to an offshore company involving a Tory peer, created just days before and without any transparency, which sold Government PPE at three times the price they bought it for.

‘They are now in mediation because it wasn’t even fit for use. And millions of items are now stuck in storage costing us even more.

‘They refused even now to reveal what they know about the company in question. So perhaps, he will answer this.

‘When will we finally get the promised Procurement Bill and what safeguards will be in it to stop yet more public money being wasted and end the so-called emergency bypassing of procurement regulations?’

‘The Government got on with doing the job that was necessary. Of course, it ensures value for money and anyone who has overcharged us, let them be under no doubt, we are after them.’

Among those to make small fortunes from PPE contracts was banker Tim Horlick who sourced £253million of PPE from Asia after his firm Ayanda was fast-tracked by an adviser to Foreign Secretary Liz Truss.

Pest control firm Pestfix, whose owner Dan England was dubbed the ‘bird repeller’, had just £18,000 in the bank when it scooped a £348million contract for PPE.

Several contracts worth £679million were handed to Anthony Hazell, a 36-year-old from south-east London, despite his background being in interior design. 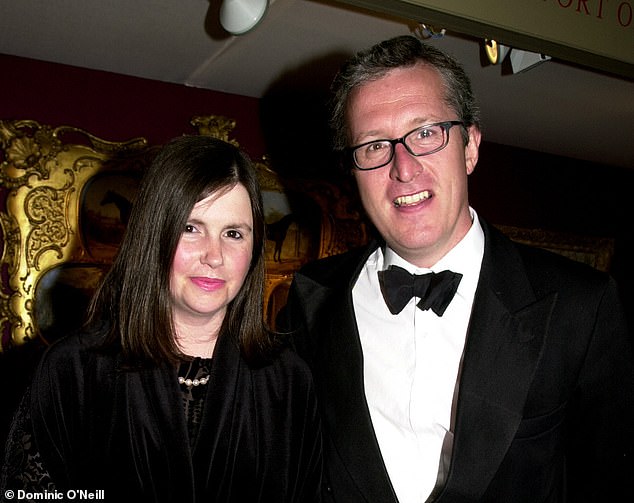 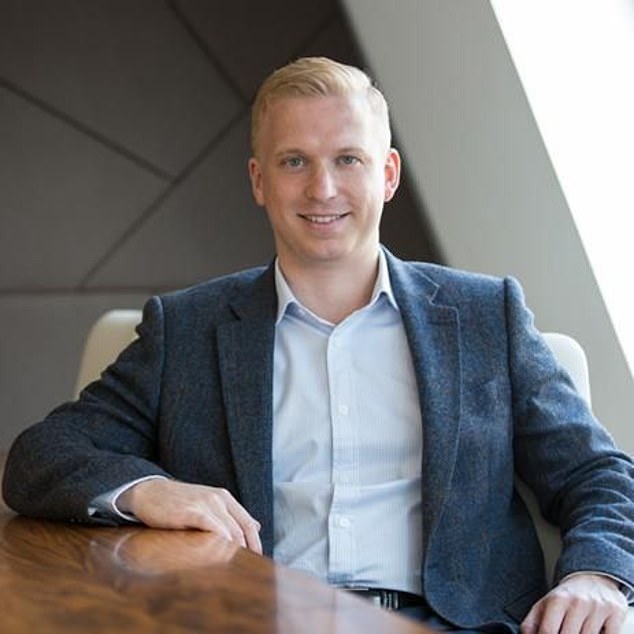 Several contracts worth £679million were handed to Anthony Hazell, a 36-year-old from south-east London, despite his background being in interior design

Meanwhile, Tory peer Baroness Mone is being investigated by the Lords standards watchdog over the awarding of Government contracts worth more than £200 million to a PPE supplier.

Lady Mone has consistently denied any ‘role or function’ in the company, and her lawyers have said she is ‘not connected to PPE Medpro in any capacity’.

A DHSC spokesperson said: ‘Our priority throughout the pandemic has been saving lives, and we have delivered over 19.1 billion items of PPE to frontline staff to keep them safe.

‘Having too much PPE was preferable to having too little in the face of an unpredictable and dangerous virus, given this was essential to keep our NHS open and protect as many people as possible.

‘Where contracts are in dispute, we are seeking to recover costs from suppliers and we expect to recover significant amounts of taxpayers’ money.’