Golf is undergoing a boom not experienced since the Greg Norman era, with 253,000 more Australians taking up the sport during the pandemic as participation in organised team sports declined.

Tee times at golf clubs are booked out, club memberships are up by 5 per cent and retailers are reporting three-month delays for customised golf clubs and shortages of some golf balls. 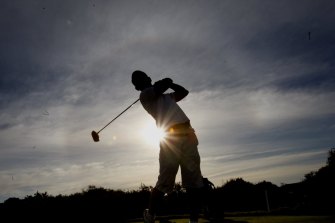 Golf is experiencing a resurgence during the pandemic.Credit:Louise Kennerley

According to Golf Australia chief executive James Sutherland the growth has been driven by the sport being perfectly suited to social distancing and experiencing fewer COVID interruptions than team sports.

“Rusted-on golfers are playing more, retired golfers have come back to the sport and new golfers have discovered it,” said Mr Sutherland. 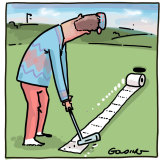 The latest Sport Australia AusPlay survey reveals that socially-distanced recreational activities such as golf and tennis thrived during the pandemic. An estimated 253,000 more Australian adults played golf in 2020 compared with 2019, while 185,000 more played tennis.

This came as the proportion of children playing sport at least once a week dropped from 55 to 43 per cent, Sport Australia’s acting chief executive Rob Dalton said, and participation in organised team sports including soccer, netball and basketball declined.

“Sports like golf and tennis, which were not as affected by lockdowns and restrictions, have seen significant increases in participation over the past 12 months,” Mr Dalton said.

The new crop of golfers are not your stereotypical old, white men – golf clubs are reporting a huge uptick in women and young people joining their ranks.

James Han, 29, is among them and started lessons at Oakleigh Golf Course in Melbourne’s south-east in January in the hope of improving his networking skills.

“I work at a waste management company and I am dealing with lots of corporate clients,” he said. 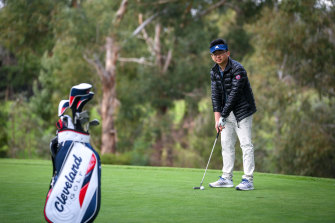 James Han took up golf during pandemic because he thought it would be a good way of networking with clients.Credit:Eddie Jim

“I can now talk to my potential customers about golf and one day I will invite them to play golf when my skills have improved.”

Teeing up also keeps Mr Han fit and provides a change of scenery from his city apartment. He attends weekly golf lessons at the public course that are conducted in Mandarin and has been regularly playing golf with a friend.

“I see younger people, more women and more people from cultural minorities,” he said. “Golf is having a comeback.”

Ravi Abeyaratne, the marketing director of Drummond Golf, said his stores were selling twice as much stock and customers were waiting up to 12 weeks for customised golf clubs, up from around two weeks. Golf balls are in demand, and some brands are constantly out of stock. 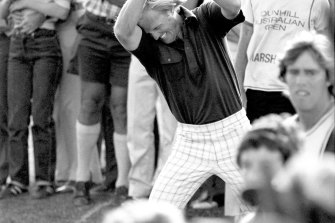 Greg Norman inspired Australians to take up golf in the 1980s and ’90sCredit:Peter Morris

“Global demand for golf equipment has gone through the roof,” he said. “The factories in China can’t keep up.”

Mr Abeyaratne, who has worked for the golf retailer since 1986, said it was pleasing to see such a diverse range of people coming into his stores.

“COVID has done to golf what Greg Norman and Tiger Woods couldn’t,” he said. “This has been something no one predicted.”

Norman’s dominance during the 1980s and 1990s inspired a new generation of Australian golfers, with club memberships peaking at 500,000 in 1998 before steadily declining.

By 2019, memberships had reached an all-time low of 383,000 and it was reported that almost 100 golf clubs across the country were on the brink of financial collapse.

But the pandemic has turned the fortune of golf clubs around, according to Barb Kelly, the general manager of Gardiners Run Golf Course in Lilydale in Melbourne’s north-east. She said memberships at her club had increased by 40 per cent over the past year as locals made the switch from footy and other teams sports to golf.

Tee times are booked out throughout the week, and the club now runs a competition every day, up from five times a week before the pandemic. The new members are mostly locals who had to give up footy and soccer during the pandemic.

“Our challenge now is to retain these golfers and we will work hard to ensure we have programs in place that keep them wanting to play golf,” she said.

Vaughan Somers, a professional golfer and the general manager of Melbourne Golf Academy, said his facility was full throughout the week and golfers were sometimes having to wait 45 minutes for a bay in the driving range.

“I’ve been in the industry for 40 years and this is the biggest boom by miles.”

Federal Sports Minister Richard Colbeck is confident that other sports will emerge from the pandemic in a strong position.

“We recognise it will be a long recovery process for some and we remain committed to supporting sport through these uncertain times,” he said.