BRITAIN'S deadly coronavirus outbreak could peak at Easter and last for six months – with millions set to be infected.

The killer disease is now rapidly spreading across the UK and passing from person-to-person at an alarming rate. 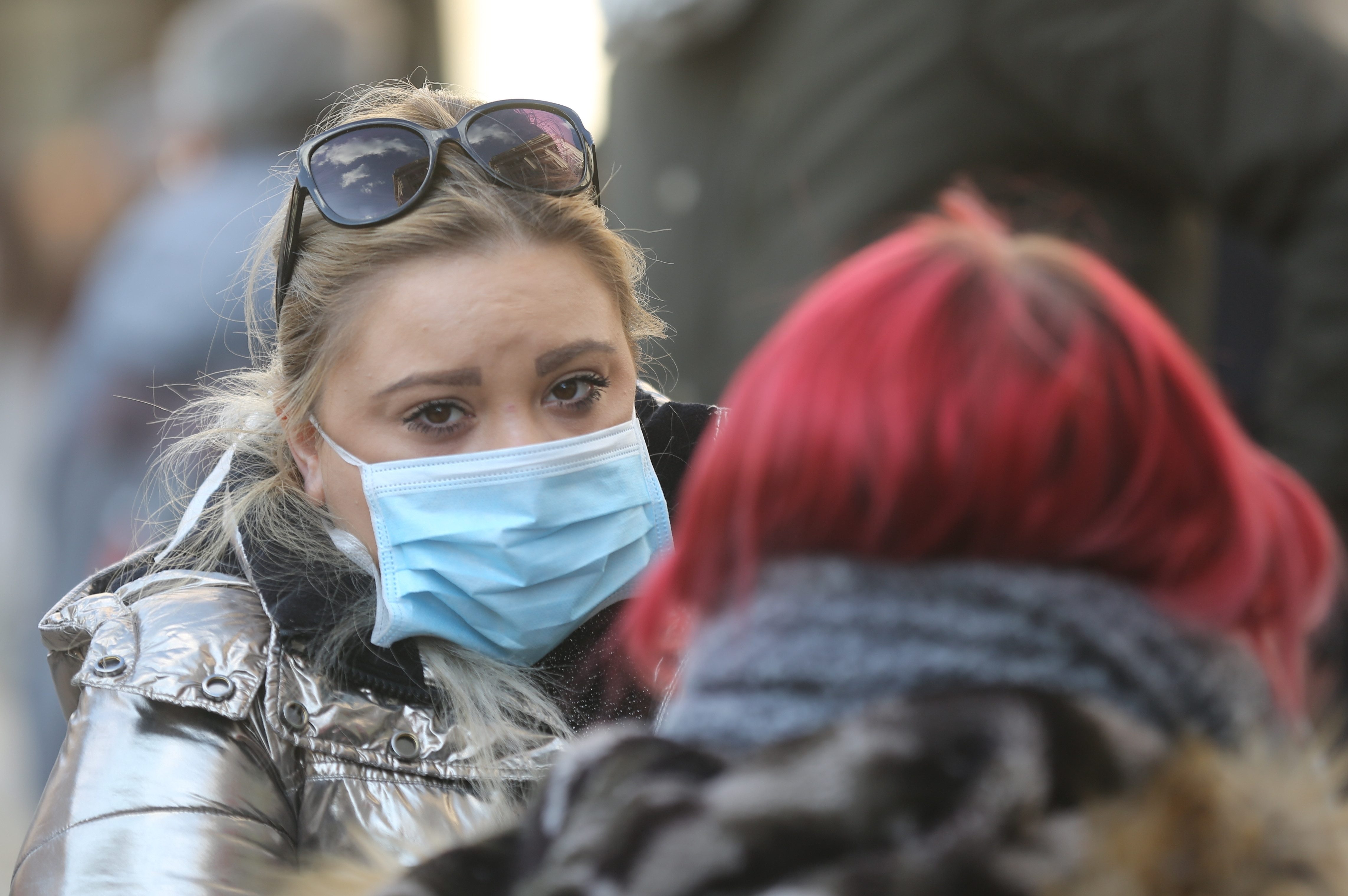 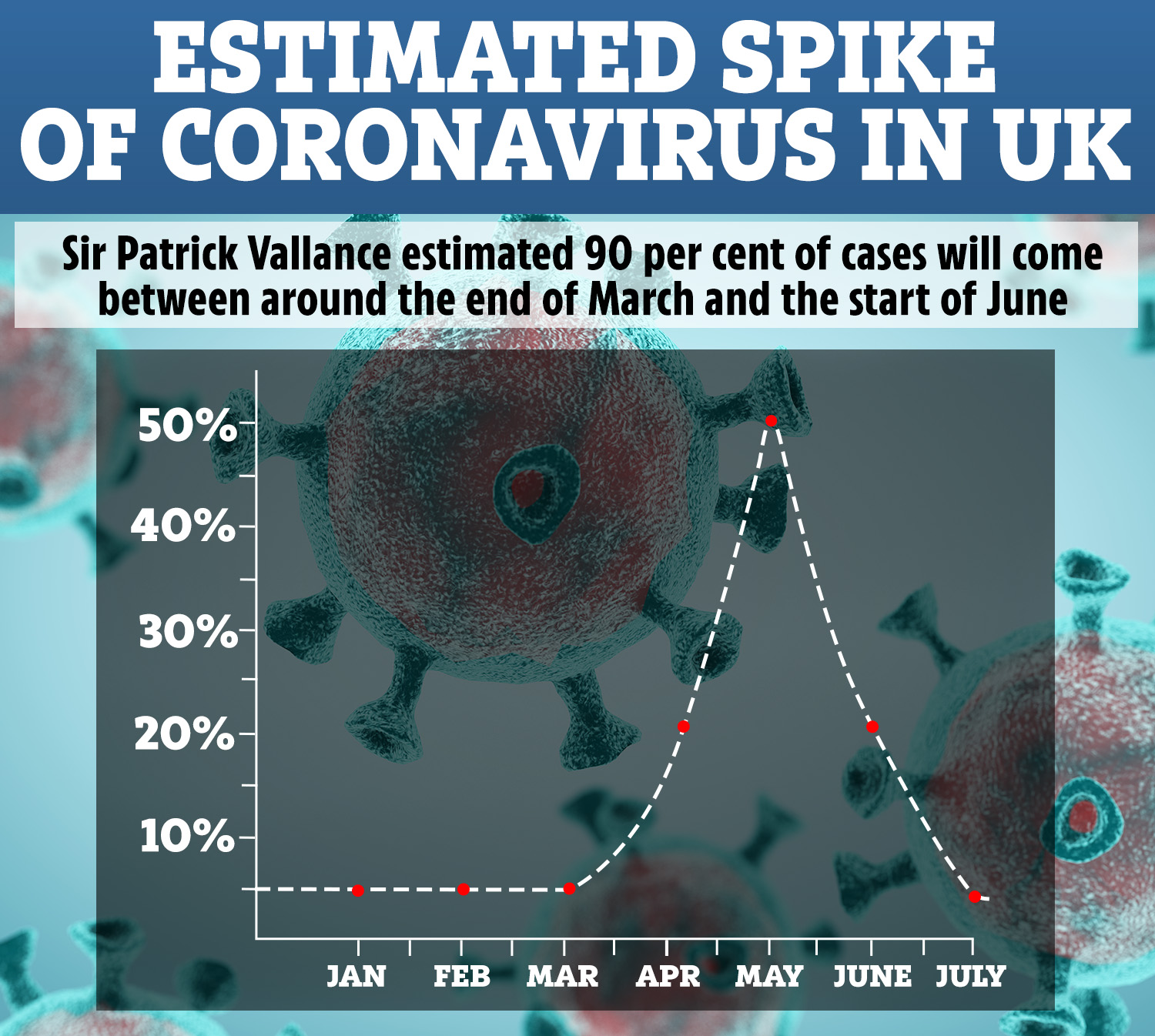 It is currently accelerating at its fastest level yet – with 164 Brits infected and an 88-year-old man yesterday becoming the second coronavirus death in the UK.

But experts now say the outbreak could peak around Easter as millions are expected to be struck down with the deadly bug.

Microbiologist Peter Piot told The Times: "I’m often asked whether the threat is being overhyped. The answer, to me, is no.

"This is the real thing.

"I  think we will go to the peak of the epidemic somewhere around Easter." 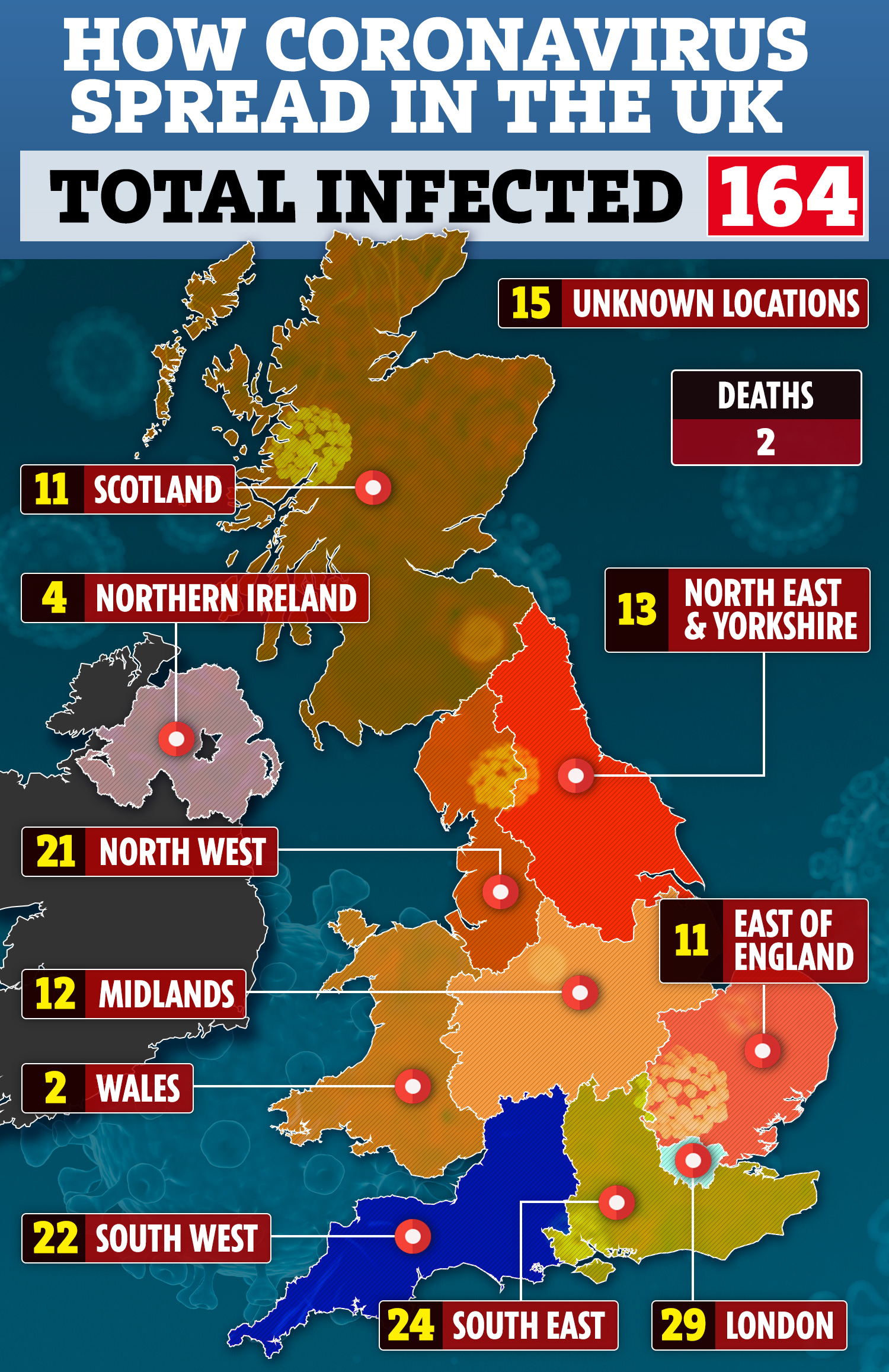 Even once it reaches its peak, coronavirus chaos could last for another six months – infecting millions of people as the UK is ravaged by the disease.

Dr Piot added: "If it goes down in April or May it could come back again in November.”

His comments come as Sir Patrick Vallance, Chief Scientific Adviser to the Government, warned Britain was at the start of an outbreak.

The number of infected patients across the UK more than doubled between Tuesday and Thursday, with the figure rising from 51 to 116.

He said: "We have cases across Europe, across the world, this is a global epidemic and we would expect to see more cases in the UK.

"We've got a reasonable worst-case scenario… that involves 80 per cent of the population and we think the mortality rate is one per cent or lower. I expect it to be less than that.

The UK was first gripped by the disease, which originated in ground zero Wuhan, on January 29 when it was confirmed two members of the same family had tested positive in York.

Since then, coronavirus has exploded around the country with two people aged over 70 dying from the disease in Berkshire and Milton Keynes this week.

Britain is now bracing itself for more deaths as ministers draw up drastic measures – including potentially axing events and closing schools – to prevent the spread.

The Government yesterday revealed a £46m emergency package to help find a coronavirus vaccine and develop a faster test for the virus.

Elderly patients are the most vulnerable to the virus, with mortality rates of around nine per cent – one in every 11 people – recorded so far in people aged over 80.

In children and adults aged under 30 the mortality rate plummets to fewer than one in every 500 cases.

Up until now most cases were in clusters around people who had travelled back to the UK from aboard.

But now – with the rate of cases rocketing – the outbreak from person to person in communities has taken hold.

Dr Richard Hatchett, who heads up the Coalition for Epidemic Preparedness Innovations, said the government needs to adopt an "aggressive" response to tackle the virus.

He said: "This is the most frightening disease I've ever encountered in my career, and that includes Ebola, it includes MERS and it includes SARS.

"I think the most concerning thing about this virus is the combination of infectiousness and the ability to cause severe disease or death." 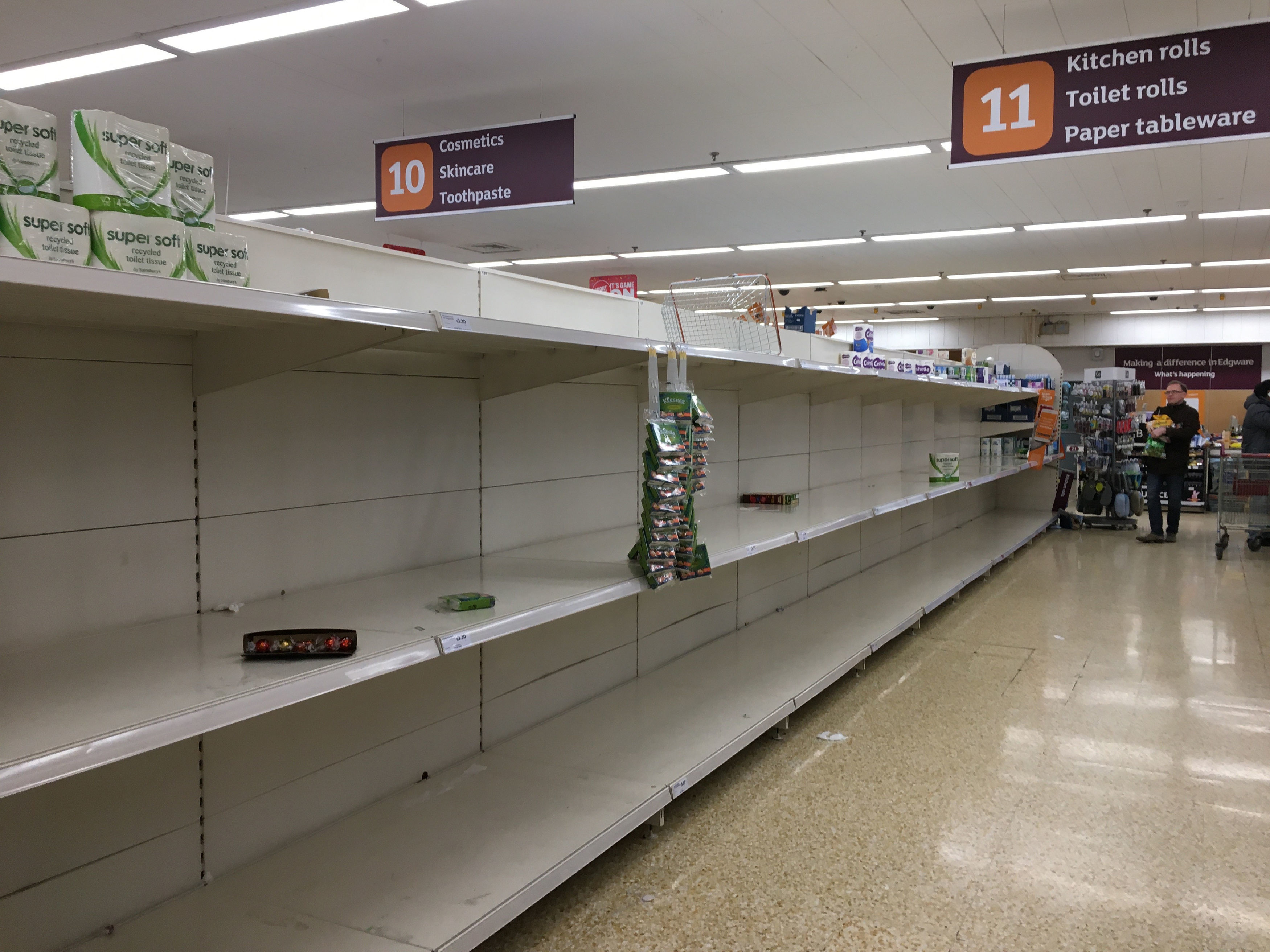 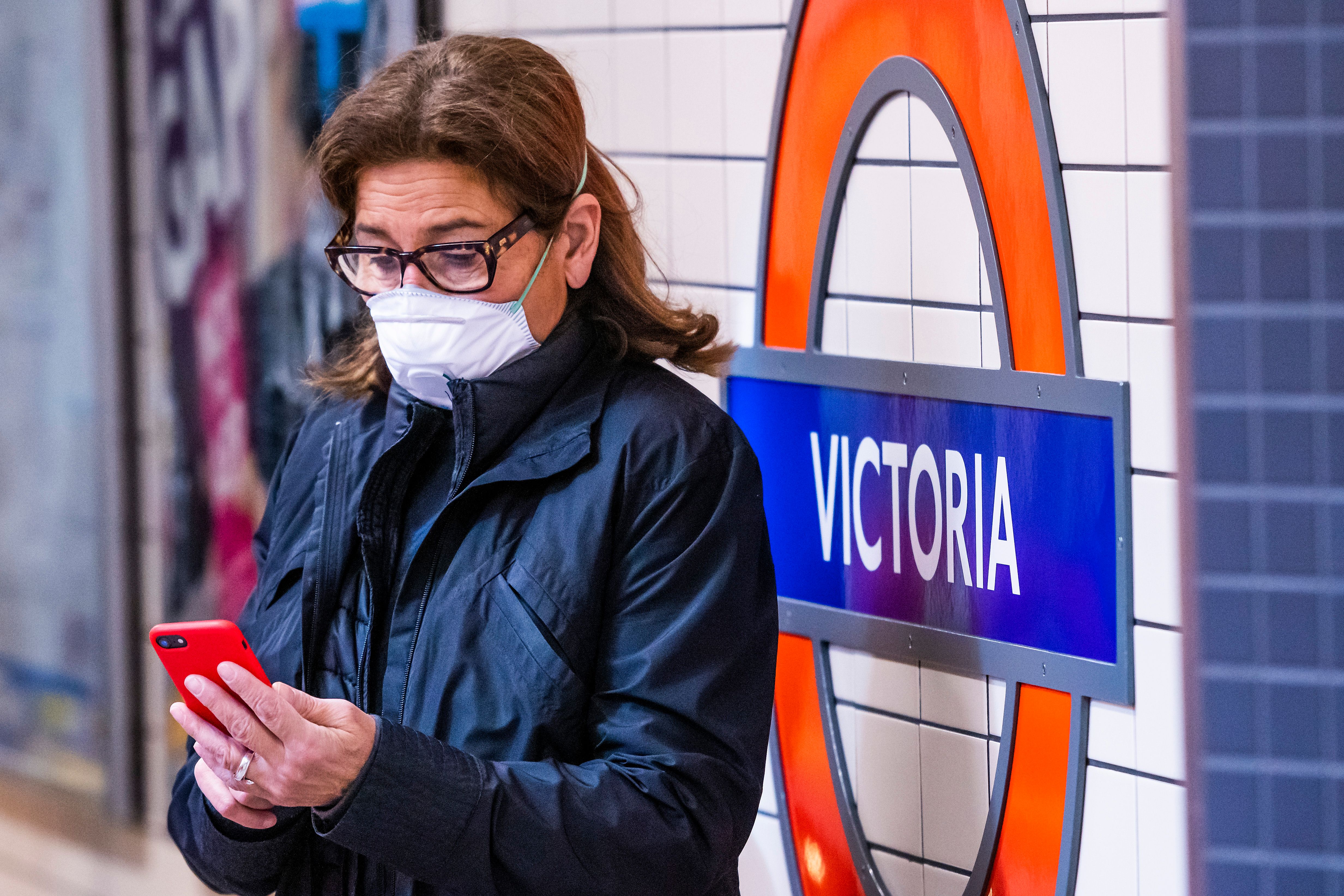