Skip to content
HomeWorld NewsUnited only in opposition to Netanyahu, can Israel’s fragile coalition government survive?

Jerusalem: Israel is set to swear in a new government that will send Prime Minister Benjamin Netanyahu into the opposition after a record 12 years in office and a political crisis that sparked four elections in two years.

Naftali Bennett, the head of a small ultranationalist party, will take over as prime minister. But if he wants to keep the job, he will have to maintain an unwieldy coalition of parties from the political right, left and centre. 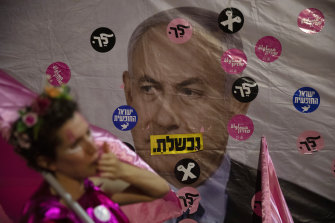 An Israeli protester wears pink during a demonstration against Israeli Prime Minister Benjamin Netanyahu outside his official residence in Jerusalem on Saturday, June 12, 2021. Hebrew reads: “You failed”,” Israel free” and “Leave”.Credit:AP

The eight parties, including a small Arab faction that is making history by sitting in the ruling coalition, are united in their opposition to Netanyahu and new elections but agree on little else. They are likely to pursue a modest agenda that seeks to reduce tensions with the Palestinians and maintain good relations with the US without launching any major initiatives.

Netanyahu, who is on trial for corruption, remains the head of the largest party in parliament and is expected to vigorously oppose the new government. If just one faction bolts, it could lose its majority and would be at risk of collapse, giving him an opening to return to power.

The new government is promising a return to normalcy after a tumultuous two years that saw four elections, an 11-day Gaza war last month and a coronavirus outbreak that devastated the economy before it was largely brought under control by a successful vaccination campaign.

The driving force behind the coalition is Yair Lapid, a political centrist who will become prime minister in two years, if the government lasts that long.

Israel’s parliament, known as the Knesset, will convene to vote on the new government on Sunday night (AEST). It is expected to win a narrow majority of at least 61 votes in the 120-member assembly, after which it will be sworn in. The government plans to hold its first official meeting later this evening.

It’s unclear if Netanyahu will attend the ceremony or when he will move out of the official residence. He has lashed out at the new government in apocalyptic terms and accused Bennett of defrauding voters by running as a right-wing stalwart and then partnering with the left.

Netanyahu’s supporters have held angry protests outside the homes of rival lawmakers, who say they have received death threats naming their family members. Israel’s Shin Bet internal security service issued a rare public warning about the incitement earlier this month, saying it could lead to violence.

Netanyahu has condemned the incitement while noting that he has also been a target.

His place in Israeli history is secure, having served as prime minister for a total of 15 years — more than any other, including the country’s founder, David Ben-Gurion.

Here’s what to expect from the new government:

The coalition holds only a slight majority in the 120-member Knesset and includes parties from the right, left and centre.

They are expected to adopt a modest agenda acceptable to Israelis from across the ideological divide that steers clear of hot-button issues. Their first big challenge will be to agree on a budget, the first since 2019. Economic reforms and infrastructure spending may follow.

Bennett will serve as prime minister for the first two years, followed by the centrist Yair Lapid, a former journalist who was the driving force behind the coalition. But that’s only if the government survives that long.

Bennett is a religious ultranationalist who supports settlement expansion and is opposed to a Palestinian state. But he risks losing his job if he alienates his dovish coalition partners.

That will likely mean a continuation of Netanyahu’s approach of managing the decades-old conflict without trying to end it. Annexing the occupied West Bank and invading Gaza are probably off the table, but so are any major concessions to the Palestinians.

Every Israeli government has expanded Jewish settlements in the occupied West Bank and east Jerusalem, which Israel captured in the 1967 war and which the Palestinians want for their future state. This government is expected to do so in a subdued way that avoids angering the Biden administration, which is pushing for restraint and an eventual revival of peace talks.

The new government is expected to maintain Netanyahu’s hard-line stance on Iran and oppose President Joe Biden’s efforts to revive its international nuclear deal. But senior officials have already vowed to do so behind closed doors rather than bringing the rift out into the open, as Netanyahu did during the Obama years.

The new government will also likely work with Biden to strengthen ties with Arab states.

The biggest change will likely be felt domestically, as the government struggles to heal the divisions in Israeli society that opened up during the Netanyahu years, between Jews and Arabs and between ultra-Orthodox and secular Israelis.

“The government will work for all the Israeli public — religious, secular, ultra-Orthodox, Arab — without exception, as one,” Bennett said Friday. “We will work together, out of partnership and national responsibility, and I believe we will succeed.”

The United Arab List, a small party with Islamist roots led by Mansour Abbas, is the first Arab party to sit in a coalition. In return for helping to oust Netanyahu, he is expected to secure large budgets for housing, infrastructure and law enforcement in Arab communities.

Israel’s Arab citizens make up 20% of the population and face widespread discrimination. They have close familial ties to the Palestinians and largely identify with their cause, leading many Jewish Israelis to view them with suspicion. Tensions boiled over during last month’s Gaza war, when Jews and Arabs fought in the streets of Israel’s mixed cities.

RETURN OF THE KING?

After a quarter-century at the highest levels of Israeli politics, no one expects the 71-year-old Netanyahu, dubbed the “King of Israel” by his supporters, to quietly retire to his private home in the seaside town of Caesarea.

As opposition leader and the head of the largest party in parliament, Netanyahu is expected to continue doing everything in his power to bring down the government. His best hope for avoiding conviction on serious corruption charges is to battle them from the prime minister’s office, with a governing coalition that could potentially grant him immunity.

But his domineering presence could continue to bind his opponents together. Bennett, already branded a traitor by much of the right-wing base he shares with Netanyahu, heads a tiny party and is unlikely to get another shot at the top job.

Netanyahu could meanwhile face a challenge from within his defeated Likud party, which includes a number of would-be successors. They know that without the polarisation around Netanyahu, the Likud would be able to assemble a strong, stable, right-wing government. But Netanyahu retains a strong hold on the party’s institutions and its base, and senior members are unlikely to challenge him unless his downfall is assured.

Netanyahu began his long rule by defying the Obama administration, refusing to freeze settlement construction as it tried unsuccessfully to revive the peace process. Relations with Israel’s closest ally grew even rockier when Netanyahu vigorously campaigned against President Barack Obama’s emerging nuclear deal with Iran, even denouncing it in an address to the US Congress.

But he suffered few if any consequences from those clashes and was richly rewarded by the Trump administration, which recognised contested Jerusalem as Israel’s capital, helped broker normalisation agreements with four Arab states and withdrew the US from the Iran deal.

Netanyahu has portrayed himself as a world-class statesman, boasting of his close ties with Trump and Russian President Vladimir Putin. He has also cultivated ties with Arab and African countries that long shunned Israel over its policies toward the Palestinians.

But he has gotten a far chillier reception from the Biden administration and is widely seen as having undermined the long tradition of bipartisan support for Israel in the United States.

His reputation as a political magician has also faded at home, where he has become a deeply polarising figure. Critics say he has long pursued a divide-and-conquer strategy that aggravated rifts in Israeli society between Jews and Arabs and between his close ultra-Orthodox allies and secular Jews.

In November 2019, he was indicted for fraud, breach of trust and accepting bribes. He refused calls to step down, instead lashing out at the media, judiciary and law enforcement, going so far as to accuse his political opponents of orchestrating an attempted coup. Last year, protesters began holding weekly rallies across the country calling on him to resign.

Netanyahu remains popular among the hard-line nationalists who dominate Israeli politics, but he could soon face a leadership challenge from within his own party. A less polarising Likud leader would stand a good chance of assembling a coalition that is both farther to the right and more stable than the government that is set to be sworn in.