We have made our live blog of the coronavirus pandemic free for all readers. Please consider supporting our journalism with a subscription.

The official tally of Victorian coronavirus exposure sites has dropped by another 50 sites overnight.

Health authorities started culling older listings from Victoria’s official exposure site list yesterday, taking the list from 314 at 9pm on Monday night to 197 by this morning.

Just one public exposure site was added yesterday: the vaccination hub at Melbourne Convention and Exhibition Centre was listed as a tier-3 exposure site after a person with COVID-19 attended the venue between 3.15pm and 4pm on June 7.

We have contacted health authorities for the official line on why the sites have been removed, but the common sense answer would be that the sites are no longer viewed as a risk to the community.

Senior officials leading Victoria’s contact-tracing efforts believe Melbourne’s Kappa coronavirus outbreak would have been contained to just over a dozen people if there had not been a delay between people developing symptoms and getting tested.

Health Department chief Euan Wallace said after almost 90 days without a coronavirus case in Victoria, complacency had become a problem in the lead up to the outbreak, first detected in May, and people were not seeking tests for a runny nose, sore throat or other symptoms.

The Victorian Health Department has estimated that if one of the earlier cases in the cluster had got tested within 48 hours, the outbreak would have only spread to 14 people, instead of 73, and the outbreak at Stratton Finance in Port Melbourne wouldn’t have occurred. 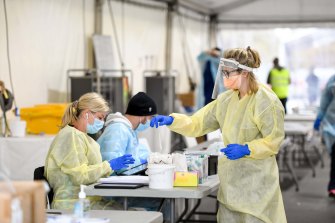 A testing centre in Albert Park in Melbourne. Credit:Joe Armao

Deputy Chief Health Officer Daniel O’Brien said while he was grateful the person did eventually have a test more than two days after their symptoms occurred, it was a reminder not to wait.

“The speed is the key. And when we lose two, three, four or five days, it really puts us behind,” he said.

Associate Professor O’Brien also revealed that subsequent swift action from contact tracers could have averted the cluster spiralling into a major outbreak, as the team being led out of the Austin Hospital managed to contact five rings of potential transmission within just 60 hours.

He said by the time they were aware of the first case at Stratton Finance, there were already another dozen COVID-positive people out in the community.

“If we hadn’t had that speed to get to that so quickly those 12 people could have really led to a major outbreak, a super-spreading event,” he said.

Despite concerns of a quarantine leak, the government is expecting to release Melbourne from tough lockdown restrictions on Friday, moving to rules similar to those in regional Victoria.

The manager and the infection-control boss of the Novotel Ibis in Little Lonsdale Street were sacked in late April after the discovery of more than 51 breaches, including 15 infection-control violations. The returned traveller arrived at the hotel from Sri Lanka on May 8. 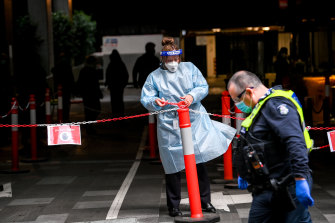 Outside the Ibis hotel in Little Lonsdale Street yesterday.Credit:Eddie Jim

Health authorities confirmed yesterday that a hotel leak was one of the most probable theories being examined to explain how the first link in a chain of Delta variant infections passed on the virus.

Deputy Chief Health Officer Allen Cheng said four theories were being investigated for how the Delta variant spread: that the man transmitted it at the hotel to a resident or worker; that he passed it on to a quarantine staff member as he was transferred from the airport or between hotels; that it was spread on the flight; or that the man transmitted it after he left hotel quarantine. Professor Cheng said the first two theories were the most likely.

Acting Premier James Merlino confirmed on Tuesday that the Delta variant had been genomically linked to the returned traveller, a Glen Eira man who tested positive the day he arrived.

Genomic sequencing returned an identical match to the second of the two families at the centre of the West Melbourne outbreak, which has now infected 15 people and has forced at least 300 people linked to the North Melbourne Primary School into isolation.

However, authorities believe there is a probable missing link between the man, who was infectious in early to mid-May, and the family that initiated the cluster, which tested positive in late May.

However, Melburnians will be restricted to travelling no more than 25 kilometres from their homes over the Queen’s Birthday long weekend.

Government officials will no doubt have a few details to iron out this morning so it’s unlikely we’ll see an early press conference today. But we’ll bring you the latest cases and news as it happens .

As always, keep an eye on the long list of exposure sites on the Victorian coronavirus website, and if you have any symptoms – a fever, a sore throat, a cough – you can find a list of testing sites here.

And if you’re over 40 or eligible in other ways, find the information to get your corona jab right here.

I’m Hanna Mills Turbet and I’ll be with you until mid-afternoon.