Skip to content
HomeWorld News‘Victory for justice’: MH17 casts its shadow over Dutch courthouse once more

At 10.31pm on July 17, 2014, a plane hurtled down runway 36C at Schiphol Airport, rose over Amsterdam, banked right and settled in for its journey to Kuala Lumpur.

Three hours later, all 298 passengers and crew were dead; shot out of the sky by a missile that exploded above the cockpit and sent wreckage raining down on the fields of Ukraine.

Had some of the passengers glanced out the windows during takeoff they might have seen an imposing white courthouse wedged next to the runway. Six years later, this same building will host their murder trial.

An extraordinary combination of forensic research, diplomatic pressure and unwavering determination for justice has brought the harrowing story of Malaysia Airlines flight MH17 to this crucial new juncture. Australia, which was home to 38 of the people on board, has been a central player. So too have grieving families who yearn for answers.

"The pain does not go away. You just try to learn to live with it."

The trial, which begins Monday, is no ordinary court case. The four people accused of obtaining and deploying the missile launcher – Igor Girkin, Sergey Dubinsky, Oleg Pulatov and Leonid Kharchenko – won't be in the dock. They won't even be in the country: three are from Russia and one from eastern Ukraine, where treaties make extradition impossible. And even if they are convicted it's likely the men will never serve a day in prison.

The four suspects are also widely seen as bit players in a much larger puzzle. The Australian government believes Russian President Vladimir Putin bears ultimate culpability, given a major international investigation concluded the missile launcher came from Russia and the people who allegedly fired it were backed by Russia.

"With MH17, Russia has demonstrated that there's a touch of evil at the heart of their government," says Tony Abbott, who was prime minister when the plane went down. "When it comes to ethics and morality, not all that much has changed since the worst days of the Soviet Union.

"To the extent that President Putin has a conscience, he should be haunted by this. I don't believe he gave the order to bring down this aircraft. But he certainly permitted a Russian missile battery to be in Ukraine, where it was under the control of people of such malice or incompetence that they did shoot down this plane, so whichever way you look at it he bears a heavy share of responsibility." 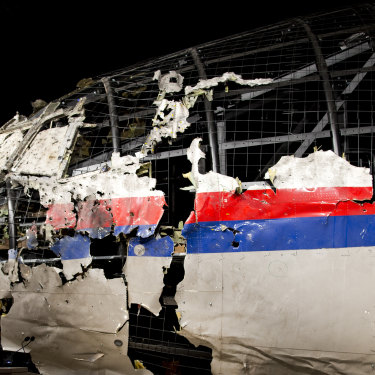 Soon after that horror unfolded in Ukraine, Abbott was in the gym of the Australian Federal Police College just down the road from Parliament House in Canberra. It was 5am and the then prime minister glanced at the television and saw the news.

"You didn't need an official briefing or intelligence officer to come in and tell you what had happened here. It was absolutely obvious from that morning that this was no accident, it was a crime. And that this was no tragedy, that it was an atrocity."

Abbott's response to the incident is regarded as one of his finest moments as prime minister. While other world leaders were more cautious in the days after the crash, he publicly blamed Russia within hours. 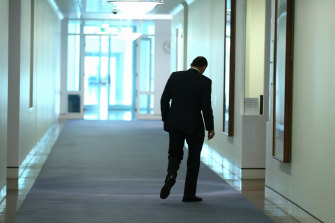 Tony Abbott walks back to his office at Parliament House after providing an update to the media in the wake of the MH17 crash.Credit:Alex Ellinghausen

In a speech to a shocked Parliament, Abbott pledged to repatriate the bodies from the warzone as quickly as possible and said Australia had a duty to the dead and their families to find out exactly what had happened and
who was responsible.

In a barb directed at Moscow, he concluded: "The bullying of small countries by big ones, the trampling of justice and decency in the pursuit of national aggrandisement, and reckless indifference to human life should have no place in our world."

Abbott now says that when he reflects on his time as prime minister, that short speech "would give the most satisfaction".

Australia, together with the Netherlands, announced in May 2018 that it formally held Russia responsible in the plane's downing based on the work of a major joint investigation by officials from the Dutch Public Prosecution Service and the Dutch police, along with police and criminal justice authorities from Australia, Belgium, Malaysia and Ukraine.

They found the missile that shattered MH17 belonged to the Russian army’s 53rd Anti-Aircraft Missile Brigade from Kursk and was manufactured in Moscow in 1986. The launcher was sent back over the Russian border after the missile was fired.

The investigators late last year claimed the pro-Russian rebels in the self-declared Donetsk People’s Republic (DPR) who allegedly had control of the missile had been in closer contact with authorities in Moscow than previously assumed, citing telephone call intercepts.

Russia has repeatedly refused to accept any blame and at times has actively worked to discredit the investigation.

A Kremlin spokesman this week did not deny Russia opposed the investigation: "We have always questioned the objectivity of the work of the investigative team, as we were deprived the chance to participate in it," spokesman Dmitry Peskov said.

Abbott says the Kremlin has not just obstructed justice but compounded grief. "It's a dreadful thing to lose someone in a horrific crime but it's an even more dreadful thing if the crime is unpunished and the death goes unavenged," he says.

"And this is the problem here: the perpetrators appear to have got off without sanction, to the best of our knowledge scot-free. From that day in 2014 to this day they have been protected by Russia.

"As I said to President Putin back in late 2014, at the very least you need to apologise for a Russian missile battery lurking in the Ukraine up to no good, and you need to pay compensation to the families of all those who were so wantonly and unjustly murdered.

"It is impossible for Australia to regard Russia as a normal country when the Russian government, from the president down, to this day connives and covers up this atrocity." 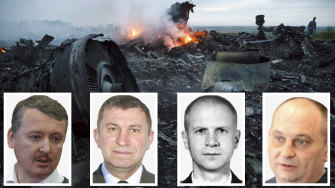 The trial is slated for two weeks in March but such is the complexity of the case that the Schiphol courtroom has been reserved for slots stretching into March 2021. The Australian government has set aside $50 million to help pay for the prosecution and assist families who want to be in Amsterdam for the hearings.

AFP officers who were involved in the joint investigation and the grisly recovery operation could be called to give evidence before the three-judge panel. Relatives of the victims will also have the right to address the court. An international media contingent of about 500 reporters is expected.

"The whole case will be laid out in every detail and that will of course include very hard details to deal with for families," warns Sander van Luik, who lost his 54-year-old brother Klaas Willem van Luik.

"Describing the magnitude and impact of the crime will require having everything laid on the table, including very ugly facts."

Like Schansman, van Luik is a member of the collection of families known as the Working Group Truth Finding MH17 and hopes the trial will reveal new information about Russia's involvement in his brother's death.

"They [Russian authorities] have been disrespectful and shameful. Somebody said its hard to shame the shameless but we are certainly trying to do that.

"We are very much interested in hearing what really happened during that terrible day in 2014. Finding the truth for families is really really important, maybe even more important than having people convicted, especially because even if they are convicted they may never serve any time in jail.

"The sheer fact that we have a court proceedings is a victory for justice."