Skip to content
HomeWorld NewsVintage photos show Central Park’s Hooverville, a shanty town surrounded by skyscrapers, built by the homeless for the homeless during the Great Depression 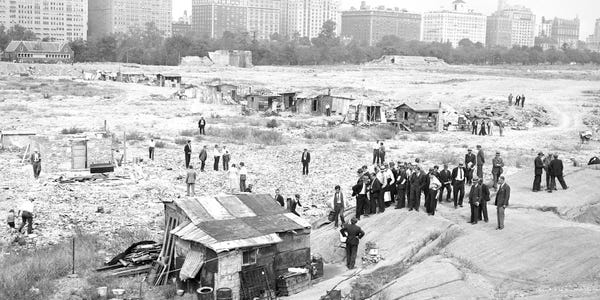 The ramshackle town was a "Hooverville," named after Republican President Herbert Hoover. Americans held him responsible for not doing enough to alleviate the Great Depression.

Hoovervilles appeared all over the US in the 1930s, some with as many as 15,000 residents. Despite their dilapidated condition, reports highlight how those living in them did their best to keep their homes tidy, and themselves presentable.

One man told a New York Times reporter in 1931: "We work hard to keep it clean, because that is important. I never lived like this before."

The Hooverville in Central Park was not the largest, or around for the longest, but something about that small group of shacks surrounded by some of New York's most impressive, expensive buildings caught people's imagination.

As one New York Daily News caption put it: "From their windows, the 'Haves' may look on the humble houses of the 'Have Nots'."

In October 1929, the US stock market crashed. It marked the beginning of the Great Depression. Millions of people would lose their jobs and homes. It crashed just as The Eldorado, a new art-deco apartment block in New York City, was finished. It overlooked a large reservoir in Central Park. 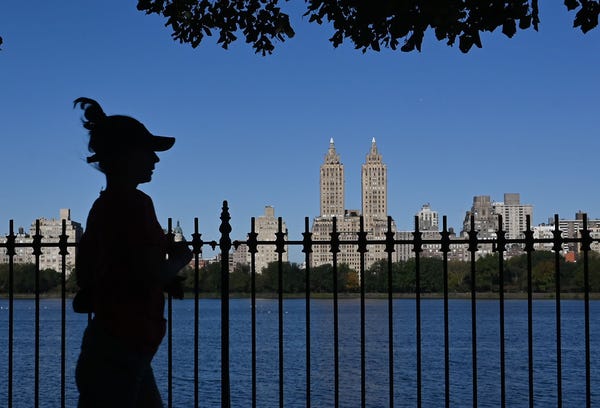 Around the time the economy crashed, the Central Park reservoir was drained. The plan was to turn it into the Great Lawn. But work on the park stalled. The Eldorado builders had not planned on providing a view of a dilapidated town, but that's what happened. 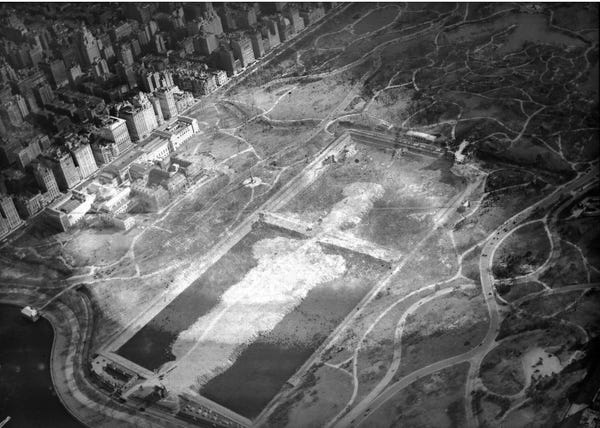 Little shanty towns — made from scraps of wood, tin, tar, and sometimes cardboard — began to sprout up across the US. One of these shanty towns emerged from the "dust bowl" left behind after workers drained the reservoir in Central Park. 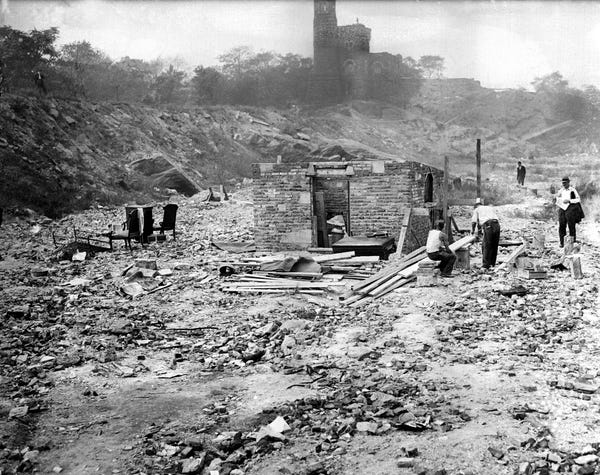 These new towns were called "Hoovervilles," a term coined by Democratic National Committee publicist Charles Michelson. It was a politicized dig at Republican President Herbert Hoover, who many held responsible for not doing enough to alleviate the depression.

However, a New York Times article from November 1930 said residents of a Chicago shanty town first came up with the name "Hooverville".

The mayor of that Hooverville, a disabled former railman, told the Times: "Building construction may be a standstill elsewhere, but down here everything is booming."

Marie Brenner wrote for Vanity Fair: "the tent city had been named with spite and menace, after a beleaguered president, the star-crossed Herbert Hoover, a businessman who had not been up to the task of fending off a historically unprecedented calamity." 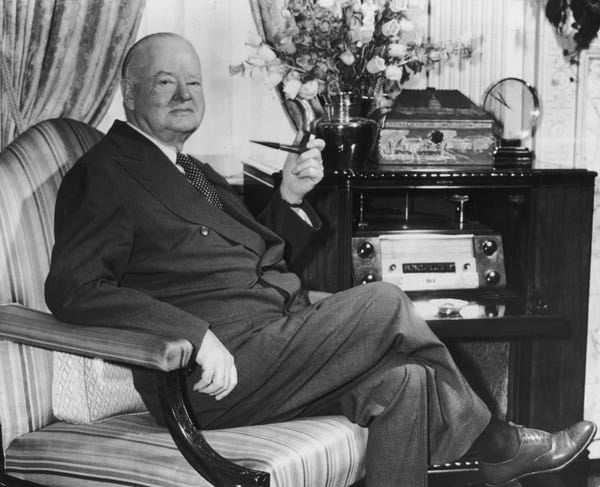 Along with shanty towns across the country bearing his name, other biting nicknames emerged, including "Hoover blankets" referring to newspapers people without homes slept under, "Hoover hogs" referring to edible armadillos, and "Hoover flags" referring to the turned-out pockets of people standing in line for food. 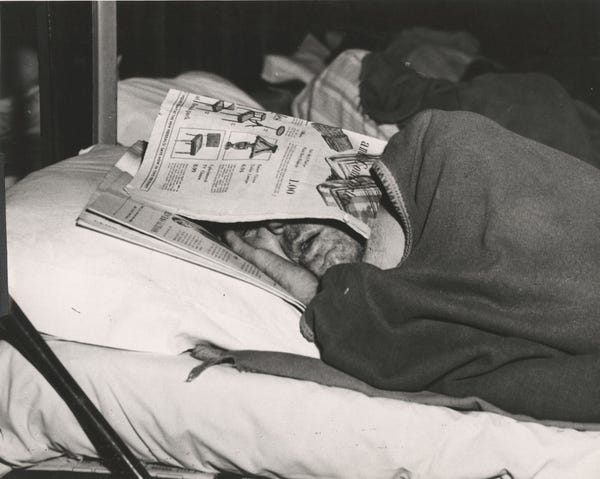 Some Hoovervilles across the US had as many as 15,000 residents. The settlements spread out over empty land, often at the edges of cities. 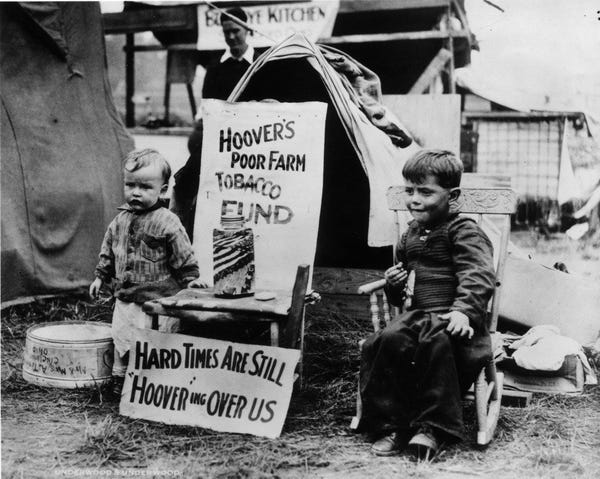 The structures, mostly temporary and in a state of disrepair, were not welcomed by the law. In December 1930, New York City police arrested several men who they discovered living in a tunnel below the drained reservoir. 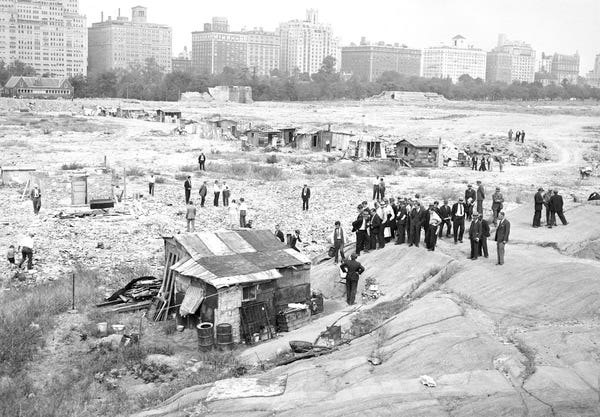 The men had made it liveable, with curtains, chairs, tables, and a red lantern. According to the New York Daily News, it was dubbed the "Little Casino," in reference to an upper-class restaurant, where then-Mayor Jimmy Walker spent a lot of his time. 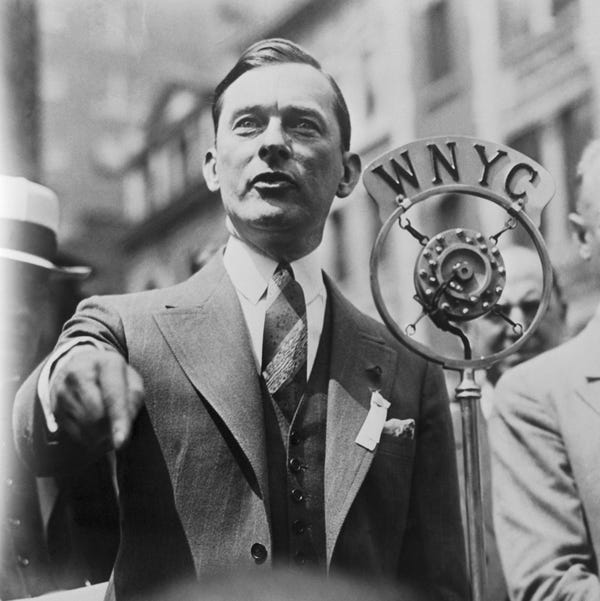 In the late 1930s, police evicted an informal camp in Central Park. The camp was an early sign of what was to come. At that point, it was not clear how bad the Great Depression would be, and public opinion about homelessness was mostly negative. 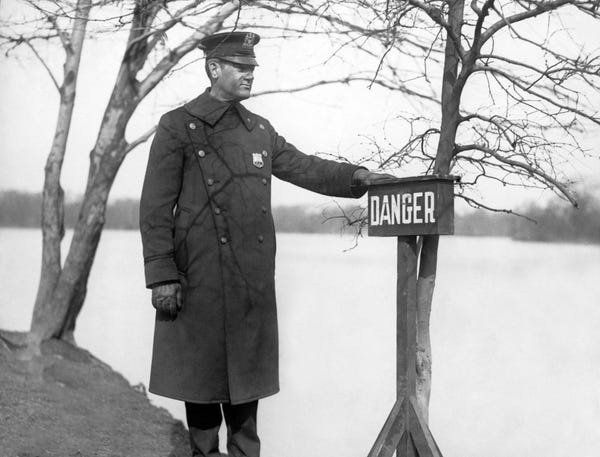 In 1931, US unemployment rose to 15%. According to Politico, Hoover's name "had become a synonym for indifference," and the public started to grow more sympathetic towards people living in Hoovervilles. 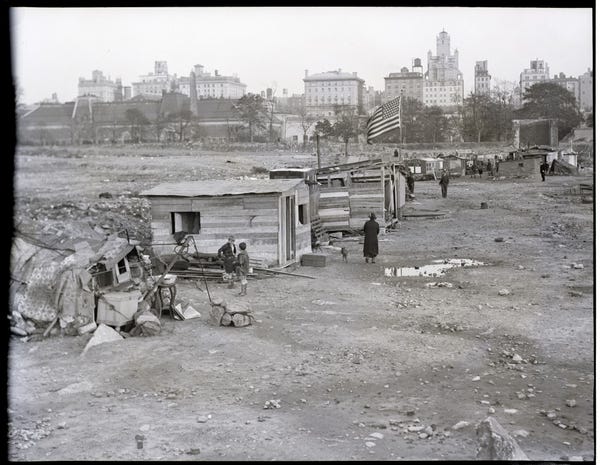 That didn't make squatting legal, though. In July 1931, 22 men were arrested for sleeping in Central Park. The judge suspended all of the men's sentences, and gave each man $2 from his own funds. 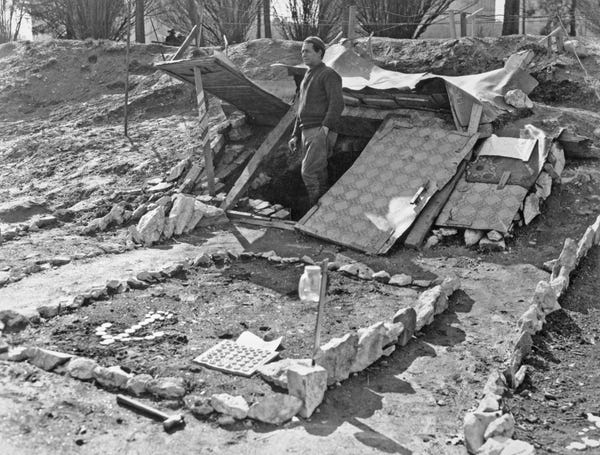 By December, signs of a small town had appeared. A reporter from The New York Times wrote about nine men living in six shacks, who were arrested for vagrancy, but had their charges dropped. 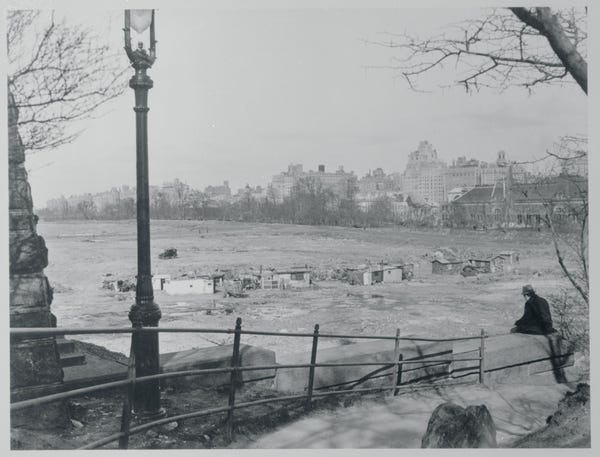 One man told the reporter: "We work hard to keep it clean, because that is important. I never lived like this before."

According to The New York Times, those living in the Hooverville made "themselves look presentable and keep their shacks as clean as they can."

By September 1932, 17 shacks lined what was called "Depression Street," in Central Park. That was as large as it got. Every shack had beds and chairs, some had carpets, and one brick house with a tile roof was known as "Rockside Inn." 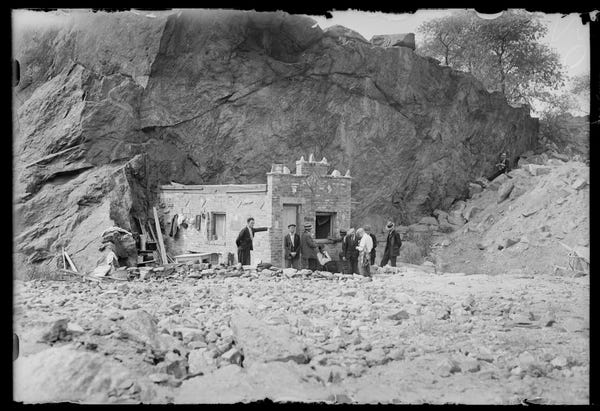 At that point, US unemployment reached 25%. Across the US, about 2 million people roamed around looking for work.

There were other Hoovervilles in New York City, but the one in Central Park was the most well-known. It went by several names: "Hoover Valley" or "Forgotten Men's Gulch." 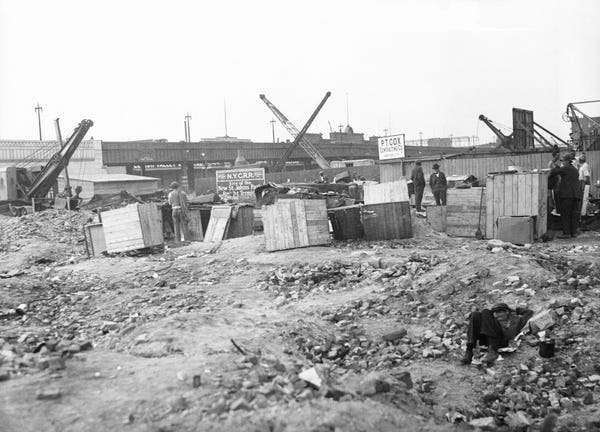 The contrast between the small shacks — at least one was an actual hole in the ground — beneath some of New York's most impressive apartment buildings caught people's imagination. A New York Daily News caption reads: "From their windows, the 'Haves' may look on the humble houses of the 'Have Nots'." 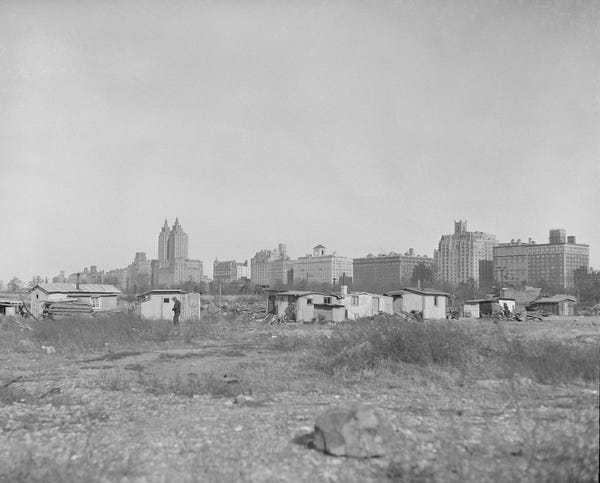 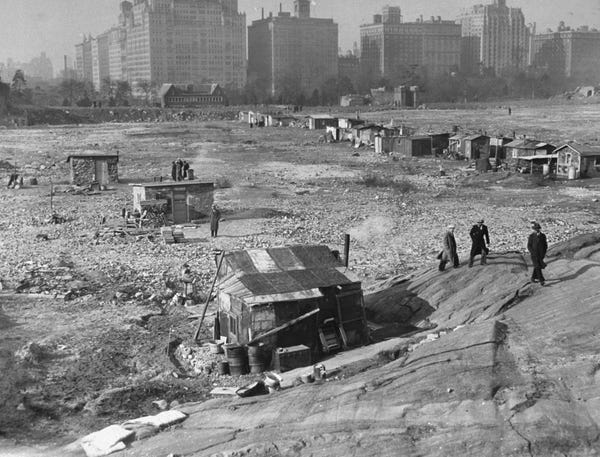 McDermott later went to jail for six months for dancing and singing without wearing enough clothes.

Central Park also provided sustenance. In June 1933, a patrolman asked a man shaking a tree what he was doing. The man responded: "We do this every day. We eat the berries. You know in the Bible people life off fig trees, so we live off these mulberry trees here in the park." 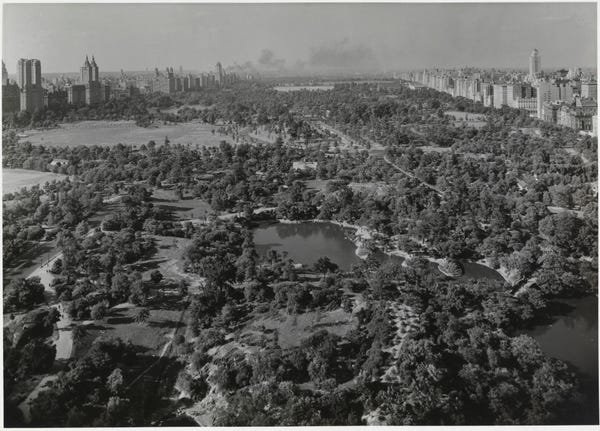 In a letter to the editor at The New York Times, J. Mitchell Jablons wrote about what people living in another one of New York's Hoovervilles were like. Jablons described them as "men gathered around open fires in empty oil drums much as we see today among the homeless." 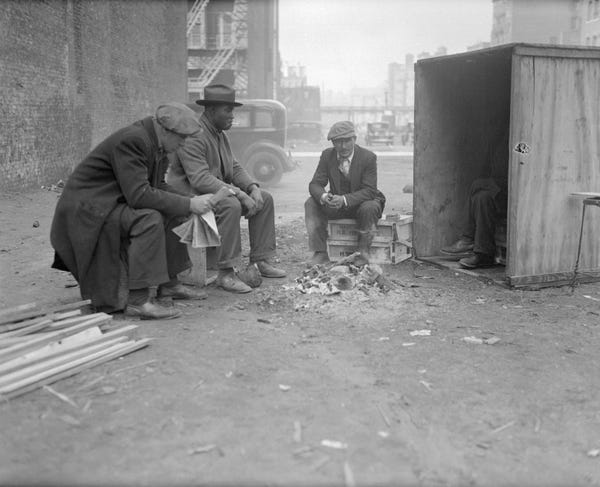 "I never felt particularly afraid of these men in the 30's who, as I remember them, were decently dressed and not menacing," Jablons wrote.

"But it was one of the sights for the people living in the high-rise apartment houses on Riverside Drive or West End Avenue to take in on a Sunday stroll between 96th and 110th Streets."

In September 1932, even though Central Park's Hooverville residents maintained their appearances, a New York City health official said that unless the city fitted running water and sewerage, they had to go. That month, 29 men were arrested for living in the Hooverville. 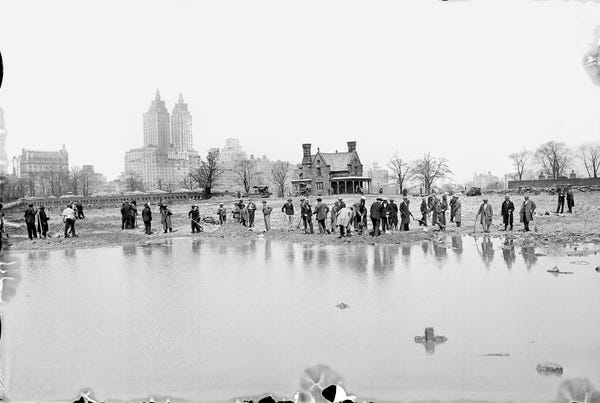 In 1933, the Hooverville was destroyed so that park workers could lay the new Great Lawn. Those who still lived there left peacefully. According to The New York Times, "in the end, as everyone else seemed to hope, they just sort of disappeared." Here, a squatter bids farewell to his temporary abode. 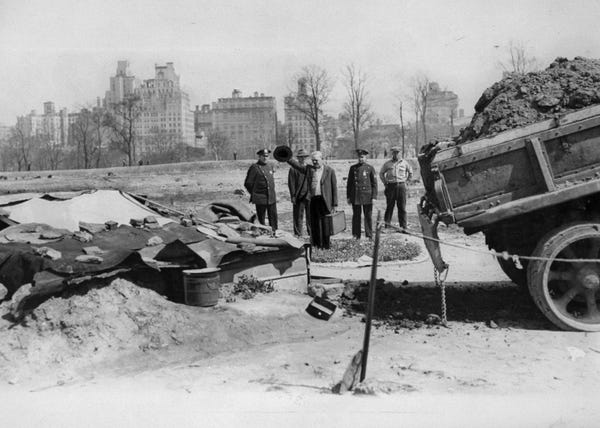 Public official Robert Moses, who's often referred to as New York's "master builder" — and a controversial opponent of the poor and people of color — ensured any traces of the Hooverville were wiped away. 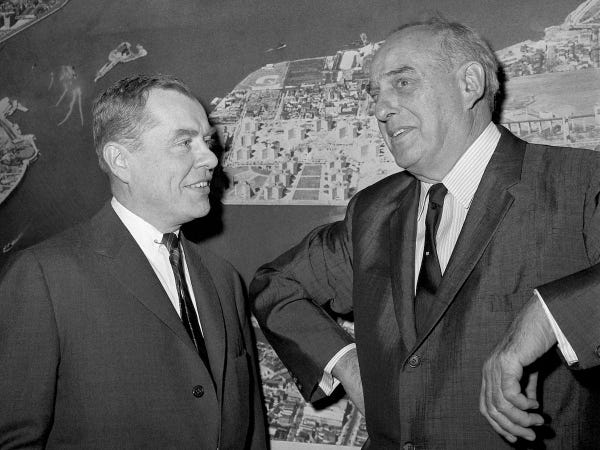 The New York Times wrote in 2007: "Moses reseeded lawns, planted flowers, repaved walks, transformed the old Croton Reservoir into the Great Lawn and built a necklace of public playgrounds along the edges of the park."

Nearly 90 years have passed since the Hooverville was destroyed, but homelessness has persisted in the US. In a single evening in 2009, a year after the Great Recession hit, 643,000 people were experiencing homelessness the country. 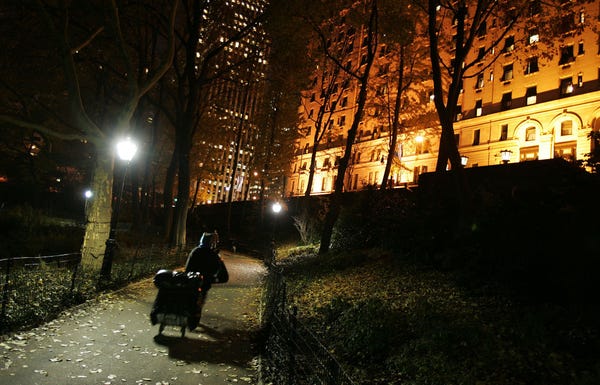 Overall though, homelessness in the US did fall between 2007 and 2019, except for a surge in California.

The numbers fell until the pandemic hit. Since then tent cities, reminiscent of Hoovervilles, have been erected in US cities, including in Los Angeles and San Francisco. 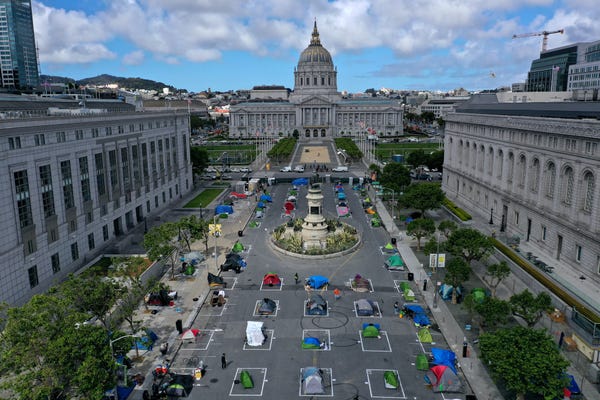 They're meant to help with social distancing and to protect people experiencing homelessness from the coronavirus.

In Central Park, a hospital tent city was also erected for COVID-19 patients. 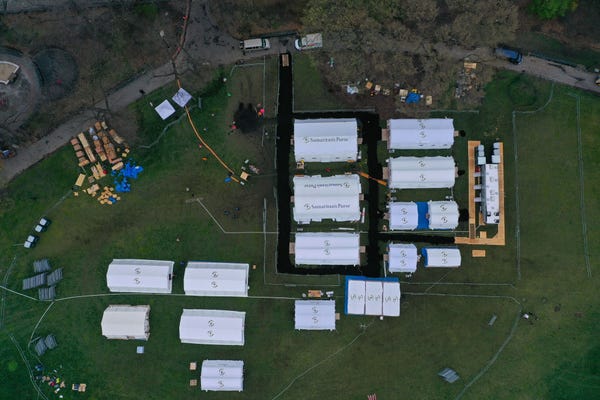 But things are expected to get worse. The pandemic could cause homelessness in the US to rise by 45%, pushing the total number to more than 800,000 people. 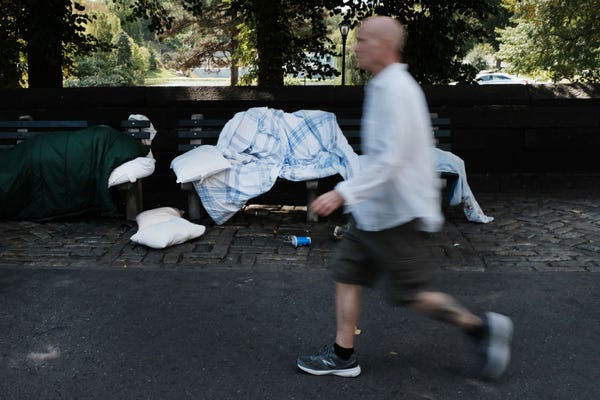 The words of "Old" John Cahill, a man living in another one of New York's Hoovervilles, still sound relevant today: "Nobody's askin' us where we're goin'," he told a reporter in 1933, as his Hooverville was cleared away. "There's not a soul thinkin' about us." 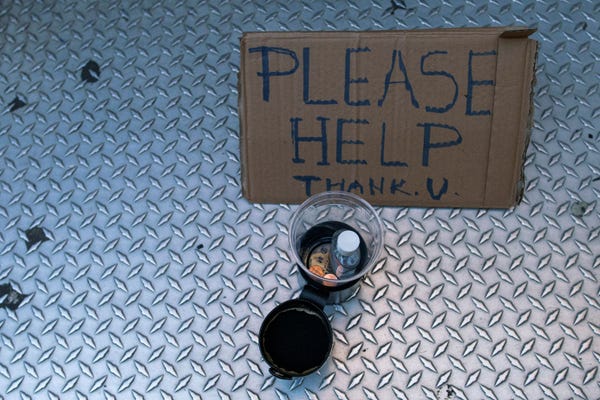