Wall Street’s most famous face is worried. Peter Tuchman, the trader whose Einstein-esque features are the most photographed on the floor of the New York Stock Exchange (NYSE), hasn’t witnessed a sell-off as bad as this since the 2008 financial crisis. And he thinks it is going to get worse.

“There’s a lot of fear here. A lot of confusion,” Tuchman said at the end of a week when investor panic over the likely impact of the coronavirus had triggered the worst sell-off in US stock markets for a dozen years.

Tuchman has been working at the world’s most famous stock market for 35 years and his picture crops up in media worldwide whenever things go right or wrong. He first rose to prominence in 2008 when a picture of his fretful face came to symbolize panic on the stock markets. There he was just a few short weeks ago, looking positively post-coital, when the key Dow Jones stock market index crossed 29,000 for the first time. Tuchman was everywhere again last week as US markets crashed. 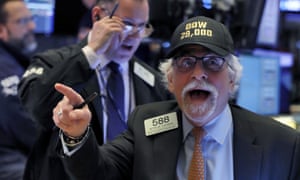 The son of Holocaust survivors and witness to the 9/11 terror attacks, Tuchman is not a man given to panic. He has a deep faith in the ability of the stock markets to adjust to catastrophe but the coronavirus has him worried. There are likely to be more dramatic sell-offs to come, he said.

Both Donald Trump and his economic adviser, Larry Kudlow, have both moved to calm investors in recent days. “I just don’t think anybody ought to panic right now,” Kudlow told reporters last Friday as the Dow Jones dropped for its sixth day in a row. “We’re going to stay the course on our policies.” Earlier in the week Trump had claimed that the coronavirus crash was a buying opportunity for investors. They didn’t take the tip.

Nor are they likely to in the near future, said Tuchman.

What worries traders is what happens next and right now no one knows and the US government is not giving investors the reassurances they need, he said.

“I don’t think our administration here has positioned or prepared itself correctly,” he said. “Investors are not stupid. They don’t like to be played and they don’t wait for the president of the United States to go: ‘Nothing to see here. Keep walking.’”

“When the world feels like it’s coming to an end, they need confidence, right? Markets can absorb virtually any disaster if they are given honest facts. And I don’t think we know the facts.”

There is “no question” for Tuchman that losses are likely to continue until the true scale of the impact of the coronavirus is better known.

“Read what the definition of a pandemic is versus an epidemic. Forty to 70% of the world’s population will be affected in some way by this situation. If that’s the case, and I don’t mean to be a doomsayer, I think that the global implications of all of these shutdowns and all these interruptions are potentially huge.”

Tuchman said he had every confidence that the stock markets would eventually recover but he, like many others on Wall Street and elsewhere, have other, more personal, fears to deal with today.

“I have fear for my family’s health and wellness. I don’t know, should I be wearing a mask on the subway? Should I not travel? You know, how is my life as I know it going to be interrupted? That’s where my anxiety lies.”

While that anxiety continues he expects more wild days ahead.