When a student in one of my classes anonymously accused me of putting too much pressure on her, it took a year to deal with the complaint. The university, after making me jump through hoops – and following its failed attempts to get other students to complain – acknowledged there was no basis for the original complaint.

How was the complaint made? Several times a year, university students are asked to fill out course evaluations, a series of questions best summarised as, “Are you happy with this course?” 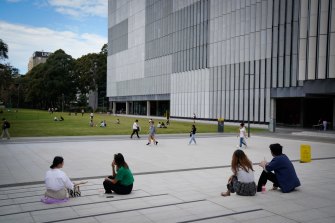 Academics face the test … the University of NSW.Credit:Wolter Peeters

Now the University of NSW wants to publish the results of course evaluations on a public website. There will be, the university claims, no names, no pack drill; and no comments. But it doesn’t take a genius, or a first year undergraduate, to figure out who is teaching poorly rated SUBJECT101 and to extrapolate the data to individual teachers.

It is a truly terrible idea and here’s why. When students fill out those forms, they don’t answer the questions before them. La Trobe University lecturer Troy Heffernan has published widely on what students really mean when they rate subjects and the teachers who teach them. It’s about gender, race, accent. It’s also about institutional practices.

Universities routinely say they don’t use these results, usually boiled down to a single number, for promotion or hiring. That’s not true either. These random responses from students, influenced by factors including whether students think people with accents should even be teachers or whether the timetabling suits them or whether they prefer academics to praise them no matter how poor the work is, are definitely used in promotion applications. I know. I used them myself – successfully.

Beyond the numbers, there is the opportunity for students to write comments which may be abusive and, perhaps worse, pure invention. Heffernan has just completed research on anonymous comments. “What every academic suspects is true about the abusive nature of the content yet very few academics have ever gone to a university to say, ‘Why are we allowing anonymous student comments to continue?’ ”

The NSW branch of the National Tertiary Education Union is before the Fair Work Commission this week battling it out, to prevent the release of the material to the student population. In the meantime, the structural reasons for student dissatisfaction remain unaddressed.

James Guthrie, distinguished professor of accounting at Macquarie University, says there are clear reasons Australian university students are disgruntled. “Staff-student ratios are very high in Australian universities, some of the highest in the world. This impacts student evaluations.”

Internationally the acceptable ratio is around one academic to 15 students. In Australia there are institutions with about one to 70. Between 2000 and last year, Guthrie says, the staff-to-student ratio significantly increased. Staff numbers have not kept up.

“All these efficiency measures would impact the student experience and would then be reflected in the evaluations of academics by students,” he says. “That’s the only evaluation on offer.”

Southern Cross University’s Alessandro Pelizzon, of lobby group Academics for Public Universities, argues there should be a comprehensive analysis of the skills of the people who make up university councils. He asks: how many have the expertise to run a university?

As Guthrie points out, there is little public evaluation of senior university executives including vice-chancellors, a shame for both students and the academics who teach them.

Jenna Price is a visiting fellow at the Australian National University and a regular columnist.