Skip to content
HomeWorld NewsWhat's the worst cheating scandal in each sport?

Pretty much every sport has a cheating scandal. At one point or another, one person or a group of people have tried (and sometimes succeeded) to game the system and get ahead of others. Sometimes it's for money, sometimes it's for glory, but one thing is always true: it's unfair to those who play by the rules.

There are three cheating scandals unfolding right now in three different sports: chess, fishing, and poker, and they could each be the worst cheating scandal in the history of their individual sports.

The largest chess website, chess.com, announced on Tuesday that an internal investigation concluded that 19-year-old grand master Hans Niemann cheated in over 100 matches on their site.

At the Lake Erie Walleye Trail championships on the shores of Lake Erie on Saturday, Chase Cominsky and Jake Runyan were found to have loaded the bellies of their fish with weights so they could be named Team of the Year and win $30,000 in prizes.

In poker, wild allegations are being leveled over Robbi Jade Lew's unthinkable $109,000 bluff call in what ended up being a $269,000 pot. Lew is being accused of cheating, and while she refunded the money she won, she has not at all admitted to cheating, and even accused the guy she won the money from of intimidating her in a dark hallway.

Fishing, chess, and poker are having their moments right now, but what are the biggest cheating scandals in other sports? Nearly every sport has a cheating scandal, and you can read about the worst ones right here.

Football: Spygate, courtesy of the Patriots

The NFL has had plenty of cheating scandals over the last 15-20 years, so there are a lot to choose from. Should it be Bountygate, which wasn't so much cheating as it was dangerously enhanced incentivizing? Should it be Deflategate, which was an alleged effort to cheat at football using the actual on-field tools of the game? Or Spygate, the videotaping of another team's signals?

In the end, Spygate was first, and is still the one discussed the most, complete with exaggerated gasping and pearl clutching. During the 2007 season, the New England Patriots videotaped the New York Jets defensive signals from their own sideline during a game, which commissioner Roger Goodell ruled as intentional cheating. Head coach Bill Belichick was fined, the team was fined, and they lost their first-round draft pick. All tapes and notes from those videotaped sessions were destroyed, which has left a lot more questions that will probably never be answered.

You can say what you want about individuals who took steroids and never got caught, but when it comes to coordinated cheating, baseball's biggest scandal is the 2017 Houston Astros stealing signs using ballpark cameras and communicating them using the bangs of a trash can lid. The team did this during the 2017 and 2018 seasons, including the 2017 playoffs and their World Series victory over the Los Angeles Dodgers.

In the end, the players who carried out this scheme weren't punished thanks to an immunity deal with MLB, but GM Jeff Luhnow and manager AJ Hinch were both fired and subsequently suspended from baseball for the 2020 season. Boston Red Sox manager Alex Cora, who served as Hinch's bench coach during the cheating seasons, was also suspended for the 2020 season, and the Red Sox parted ways with him. Hinch and Cora have since returned to managing in the majors, with Hinch managing the Detrpot Tigers and Cora going back to his job with the Red Sox. 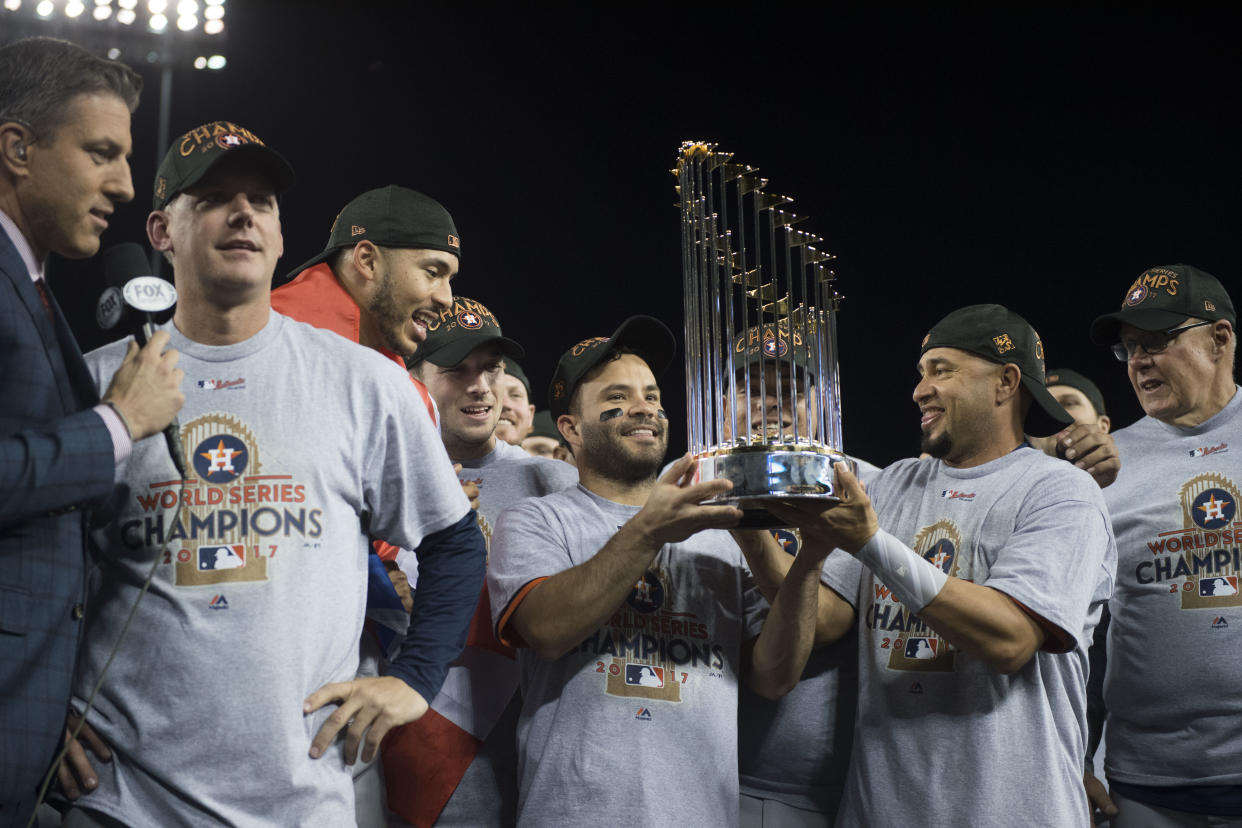 In 2007, then-referee Tim Donaghy was arrested on suspicion of betting on hundreds of basketball games, including those he officiated, and was accused of match fixing, or making calls that affected the result of games to benefit himself and others. Donaghy maintains that he only used his knowledge of the game to make bets, but he was convicted on federal charges and sentenced to two years in jail.

Calciopoli was a major scandal in Italy's top soccer league, Serie A. Juventus GM Luciano Moggi was caught on wiretap pressuring referees to favor certain clubs with their calls, and the scandal eventually pulled in AC Milan, Fiorentina and Lazio. The consequences were major. Every team involved was punished in some way, largely by points deductions and exclusion from certain events, but Juventus got the biggest punishment. They were relegated to Serie B, had nine points deducted, stripped of 2004-05 Serie A title, and downgraded to bottom of 2005-06 table. Moggi, who always maintained his innocence, resigned from his position, as did Italian football federation president Franco Carraro and vice-president Innocenzo Mazzini. Moggi was also handed a lifetime ban from the sport.

In 1983, undefeated junior middleweight Billy Collins Jr. took on journeyman Luis Resto at Madison Square Garden, and the result was stunning. Resto, known as a light puncher, beat the ever-loving crap out of Collins, punching his eyes until they were swollen shut. The punches tore one of Collins' irises, resulting in blurred vision that ended his boxing career.

When Collins' father, who also served as his trainer, shook Resto's hand at the end of the match, he felt that the boxing gloves were thin. He demanded the gloves be impounded, and an investigation showed that an ounce of padding had been removed from each one and replaced with chalk, which Resto finally admitted to in 2007. Resto was convicted of assault, criminal possession of a weapon, and conspiracy and spent two and a half years in prison. As for Collins, he died in a car accident in 1984, and his family believes that the loss of his livelihood contributed to a breakdown of his mental state.

A lot of MMA fighters have been caught for doping, to the point that picking one is extremely difficult. In 2000, Josh Barnett took out Randy Couture to become the youngest heavyweight champ in UFC history, only to test positive for a banned substance and be stripped of the title. Royce Gracie, one of the most important figures in MMA history, tested positive after his 2007 rematch with Kazushi Sakuraba. Anderson Silva, who is one of the best MMA fighters of all time, has tested positive. Nick Diaz. Cris Cyborg. Chael Sonnen. Jon Jones tested positive not too long ago. In an individual sport like MMA, doping is the main way to cheat, but it's not a rare occurrence.

Doping in sports is often a decision of a single athlete (and possibly their support team), but Russia's doping stands out because it's widespread and state sponsored. Between 2002 and 2016 a total of 43 Olympic medals were stripped from Russia, in sports ranging from shot put, weightlifting and cross country skiing. Over 150 Russian athletes have been caught doping, more than any other country in the world by far. In 2019 the World Anti-Doping Agency banned Russia from all sporting events for four years (which was since reduced to two years), a ban that included the Olympics. Russian athletes have competed at the Olympics since then, but under a neutral flag using the name "Russian Olympic Committee," or ROC.

The 2002 Olympics in Salt Lake City were rocked by a scandal in pairs figure skating. In the long program, Canada's Jamie Salé and David Pelletier executed a beautiful and moving skate that was almost technically perfect. Russia's Elena Berezhnaya and Anton Sikharulidze skated almost as well, but there was an obvious technical error on one skill. Everyone was sure Canada had the gold medal wrapped up, but Russia was shockingly awarded the gold while Canada took silver.

That result seemed so obviously incorrect that an investigation was started, and French judge Marie-Reine Le Gougne quickly admitted that the competition was fixed and she had been pressured by the head of France's national skating federation to give the Russian pair a favorable score no matter what, in exchange for a favorable score for the French ice dancing pair. She and the head of France's skating federation were suspended for three years, and the awards ceremony was repeated for the first time in history. Salé and Pelletier were awarded joint gold alongside the Russians. This scandal led to the introduction of a new scoring system in figure skating. 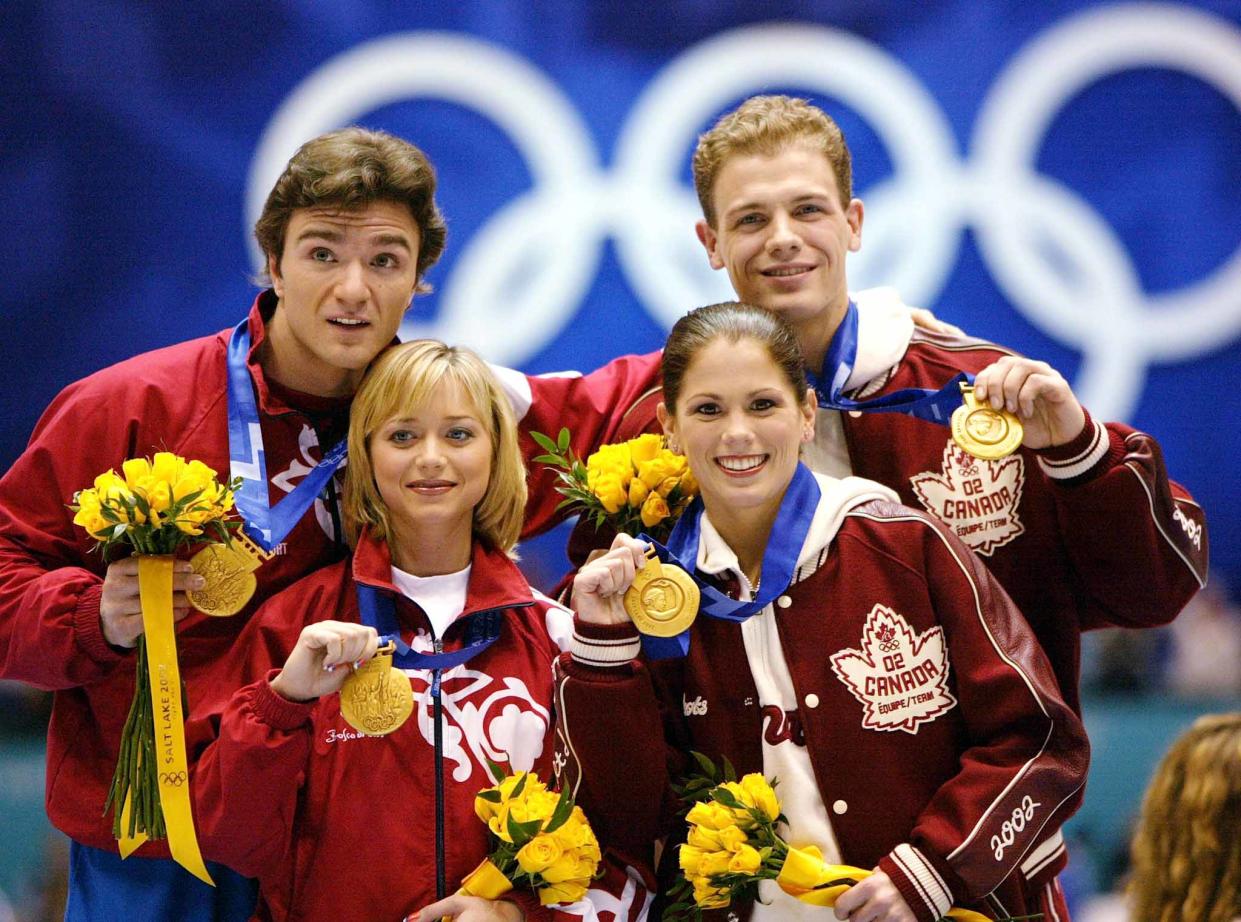 Rosie Ruiz cheated in two major marathons: the New York Marathon and the Boston Marathon. At the 1980 New York Marathon, Ruiz started with the others but took a subway ride to the finish line, where she slipped into the injury tent and was declared to have finished the race in 11th. That qualified her for the Boston Marathon, where she finished with the best female time in the race and the third-fastest in any marathon in history. Boston Marathon organizers and runners were suspicious immediately for a number of reasons, including that no one could remember seeing her during the race. Two witnesses came forward to say they saw Ruiz enter the race through a crowd of spectators about a half-mile from the finish. Ruiz's deception in Boston led to the discovery of her subway ride in New York, and she was retroactively disqualified from both races.