Washington: Federal health officials said on Friday they're scrambling to get coronavirus testing up and running in every state, as President Donald Trump's chief economic adviser urged Americans not to overreact to plunging financial markets. 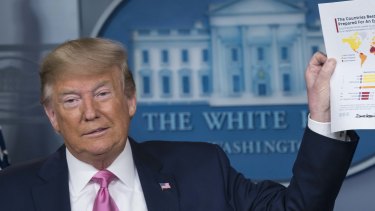 President Donald Trump says the US is number one in preparedness for the coronavirus.Credit:Bloomberg

The Centres for Disease Control and Prevention said two more Americans tested positive for the virus out of the group of quarantined passengers from the Diamond Princess cruise ship, bringing the national total to 62.

And the World Health Organisation upgraded the risk level from the virus to "very high" as it continued to spread around the globe.

The global virus outbreak has become a test of Trump's credibility and his administration's capacity to protect the nation. 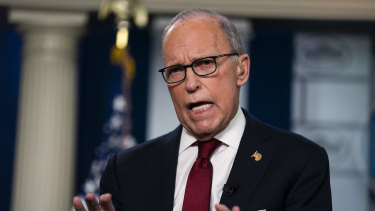 The Trump administration and government scientists both agree that the current risk to Americans is low, although that could quickly change. But the administration officials are continuing to offer assurances that concerns will blow over soon, while the scientists are emphasising preparations for circumstances as yet unknown.

As he spoke, financial markets continued their steep drop.

Of Trump, whose re-election calling card is a strong economy, Kudlow said, "I think the way he's handling it will have a very positive effect on his re-election campaign."

The governor of the State of Washington Jay Inslee, in a phone call with Vice President Pence, admonished urged him to stick to the science and tell the truth regarding coronavisus.

Trump's choice of Pence to oversee the nation's response to the new coronavirus threat has brought renewed scrutiny to the former governor's handling of an HIV outbreak in southern Indiana when he was governor.

Pence reluctantly agreed to authorise a needle exchange program in Scott County in March 2015 after the epidemic centered there saw the number of people infected with HIV skyrocket, with nearly 200 people eventually testing positive for the virus that year.

Despite his own misgivings – Pence worried about how the exchanges would affect "anti-drug policy" and had misgivings about providing clean needles to addicts – he initially issued an executive order allowing one in Scott County before later signing a law allowing the state government to approve them for counties on a case-by-case basis.

Donald Trump with Vice-President Mike Pence whom he appointed to lead the US government’s coronavirus response. “You don’t want to see panic because there’s no reason to be panicked.”Credit:Bloomberg

Federal Reserve Chairman Jerome Powell signalled that the central bank would cut interest rates to support the economy if needed. On Capitol Hill, lawmakers of both parties are working on a spending bill to be unveiled early next week and expected to be two to three times more than the $US2.5 billion ($3.8 billion) the White House had requested for anti-virus efforts.

For the CDC's disease detectives, the priority now is setting up a nationwide testing infrastructure after a shaky start. Dr Nancy Messonier, the CDC's chief of respiratory diseases, told reporters the goal is to have every state capable of testing for the virus by the end of next week.

A three-step test kit from CDC is being replaced with a two-step process that Messonnier said should work better.

"Our goal is to have every state and local health department doing its own testing by the end of next week," said Messonnier.

That's a considered a critical step, because it would push the front lines of surveillance closer to local communities where new cases might present themselves.

Disease detectives are still tracing the contacts of a Northern California woman who may be the first person in the US to get sick without having travelled to China or having been in close contact with a returning traveller.

"We need to remember right now that the case count in the US is really low," said Messonnier. "That is a reflection of the aggressive containment efforts of the US government. We hope that if there is spread, the spread will be limited and that any disease in the United States will be mild."

Public health experts say the president should let the scientists in government take the lead.

"The White House functions best when it follows the leadership of experts in emergency response," said John Auerbach, president of the nonprofit Trust for America's Health, which works with government at all levels to improve public health.

Although the president himself is famously sceptical of science, the White House is now trying to surround itself with top-flight scientific expertise. Friday, officials announced the White House and the National Academy of Sciences have established a committee of experts on infectious diseases to help on the coronavirus threat.

"We are creating a direct line to the nation's top scientific minds on public health," said Kelvin Droegemeier, director of the White House Office of Science and Technology Policy.

Next week, Congress is expected to expedite a bipartisan spending bill for the anti-virus campaign that could total between $US6 billion and $US8 billion.

The administration says it has enough funding to get through to April but that Congress should act as quickly as possible to approve additional funding. The White House wants Trump to sign the spending bill it by mid-March.

As other countries hard hit by coronavirus cancel public activities and shutter schools, Health and Human Services Secretary Alex Azar such measures could be part of the containment toolkit here, if needed.

Keeping kids home from school and running workplaces on a skeleton staff is part of what experts call "social distancing," a way to keep people from passing disease to one another. As recently as 2009, a flu pandemic led to school closures in many US communities.

"It can be indicated under certain circumstances that it might make sense to close a school or schools, or take other measures like that," said Azar. In the US that would be a decision made at the local level.

"What we're all trying to do is just be very transparent … with the public to get our mental frame around that there are things that you might see," said Azar. "That doesn't mean you will see (them)."