Australia’s retiring tennis queen Ash Barty will laugh all the way to the bank with a fortune of at least $47million.

Barty earned $32million from her 11 year playing career plus an estimated $15million from endorsements and sponsorships.

Given her extraordinary popularity it is unlikely Barty’s off-court riches will dry up just because she’s retired.

The beloved Queenslander shocked the sporting world with her retirement announcement at just 25 years of age on Wednesday.

But she does so with a vast fortune behind her, as the richest-ever Australian men’s or women’s tennis player. 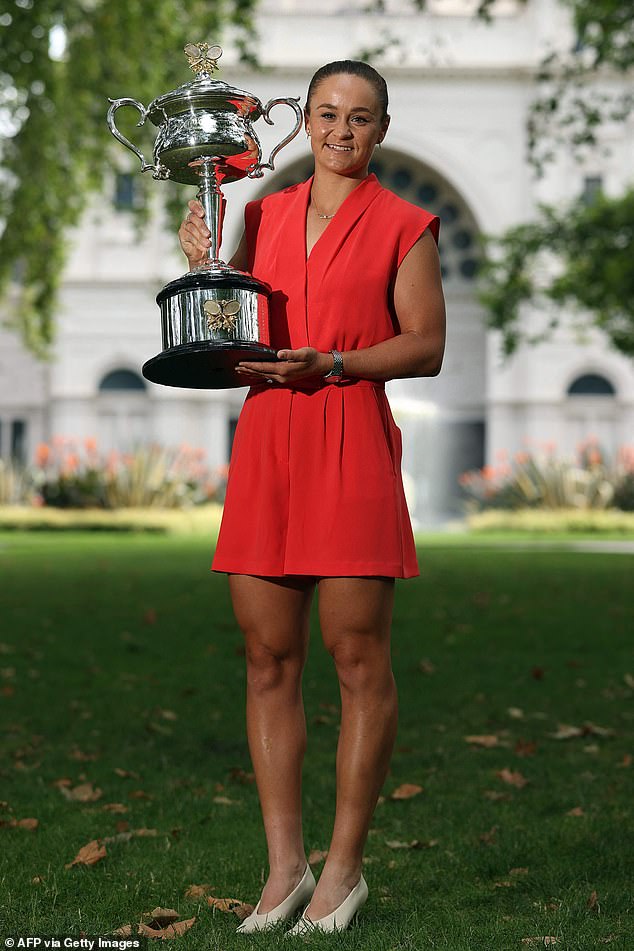 Australia’s retiring tennis queen Ash Barty will laugh all the way to the bank with a fortune of at least $47million – even if she never competes again. 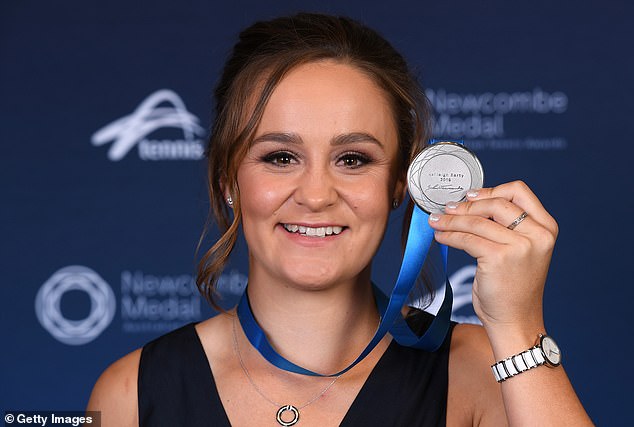 Barty is retiring one month away from turning 26 but is still expected to be added to the tennis hall of fame, largely because her current reign of 114 consecutive weeks at No.1 is the fourth-best history of women’s tennis.

Where Ash Barty’s fortune came from:

Comes from up to A$4million per season, from brands including Jaguar, Vegemite, Fila, Rado, Head, Marriott Bonvoy and Uber Eats.

Barty had been planning to retire for more than a year before she shocked the world by stepping away from tennis.

The Queenslander announced via a video posted to her Instagram account on Wednesday morning that she was retiring from the sport after spending almost three years as the world’s top player.

In an emotional interview with her former doubles partner, Casey Dellacqua, Barty  admitted she is ‘spent’.

‘I don’t have the physical drive,the emotional want and everything it takes to challenge yourself at the very top of the level any more. I am spent .’

Two-times US Open champion Pat Rafter told 3AW Barty was quitting to enjoy the rest of her life.

That journey is expected to kick off with building a dream home together with her fiance, pro golfer Garry Kissick, a multi-million dollar Queensland property.

The 2021 Wimbledon champion recently revealed the couple are planning to build a mansion in Brisbane’s west at Brookwater, having bought a vacant block for $882,000 late last year.

Brookwater is a residential community in Brisbane’s west, and features the Greg Norman-designed Brookwater Golf Course.

Daily Mail Australia understands Barty was staying at the home next to the land she purchased while her home is being built. 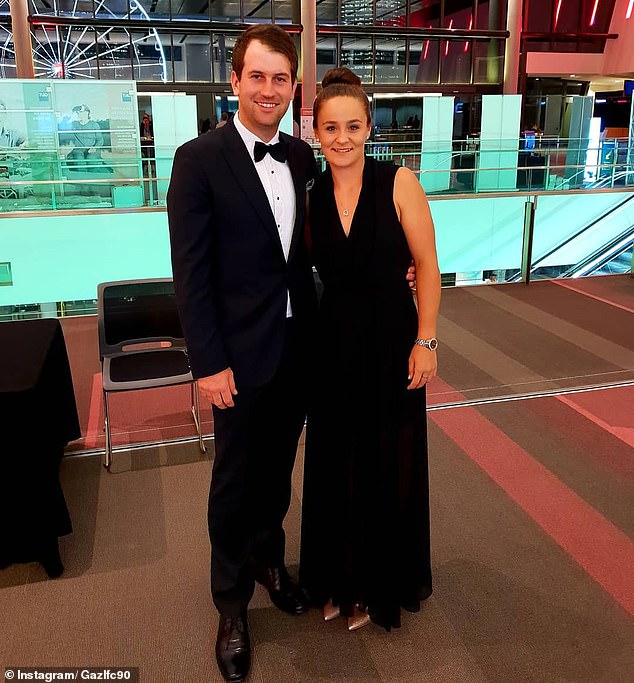 The 25-year-old world number one player is engaged to golfer Garry Kissick, with the pair about to move into a mansion in Brisbane’s west. The couple met on the golf course 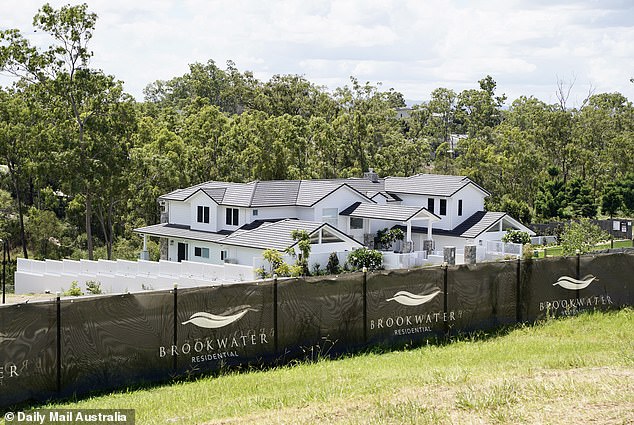 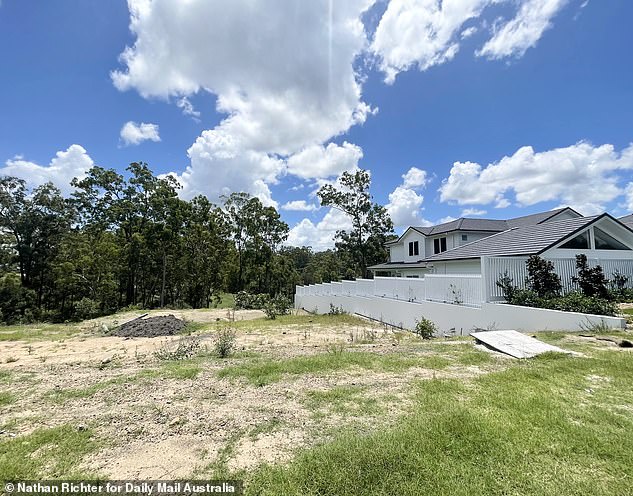 In a video released by Brookwater Residential, Barty shared how she had been working with architects to prioritise outside space.

Barty grew up in the region and said in the video she ‘couldn’t imagine living anywhere else when not travelling the world’.

Barty grabbed the world No.1 spot on June 24, 2019, and she never relinquished it with high finishes in grand slams for the next two-and-a-half years.

In that time she won 15 singles titles.

Her many victories, including 12 doubles titles – many with Casey Dellacqua, earned her $32million in prize money and millions more in sponsorships.

According to Forbes, Barty made $3million from endorsements in the year she took over the top spot. 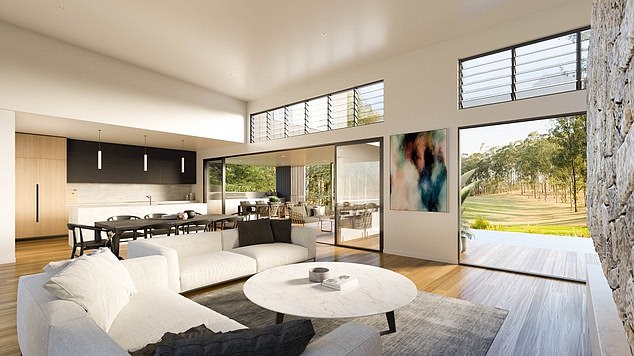 Barty’s mansion at Brookwater in Brisbane’s west is close to where she grew up in Ipswich (pictured, an artist impression of what the home may look like)

She has since won two more grand slam titles since – Wimbledon in 2021 and the Australian Open this year – and kept the top spot, and her off-court earnings for the past two seasons almost certainly would have at least matched 2019.

She retires while holding endorsement contracts with the likes of Jaguar, Vegemite, Fila, Rado, Head, Marriott Bonvoy and Uber Eats.

In November last year, Barty was the envy of her Instagram followers after posting a photo inside a Jaguar luxury car.

Looking the part by sporting a designer watch and sunglasses, the two-time Grand Slam winner wrote an accompanying message ‘Day 1 of pre-season… Still deciding if I want to get out of the car.’

It is not known how those contracts will be impacted by her retirement but given Barty’s enormous popularity it is unlikely she’ll become less appealing to brands. 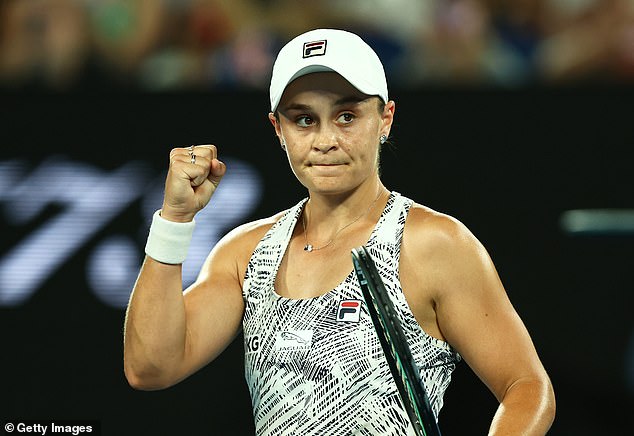 Australia’s sporting queen Ash Barty is living a lavish lifestyle most can only dream about – but her humble nature is what makes the tennis world number one so revered, and could underpin even more earnings potential even though she has retired 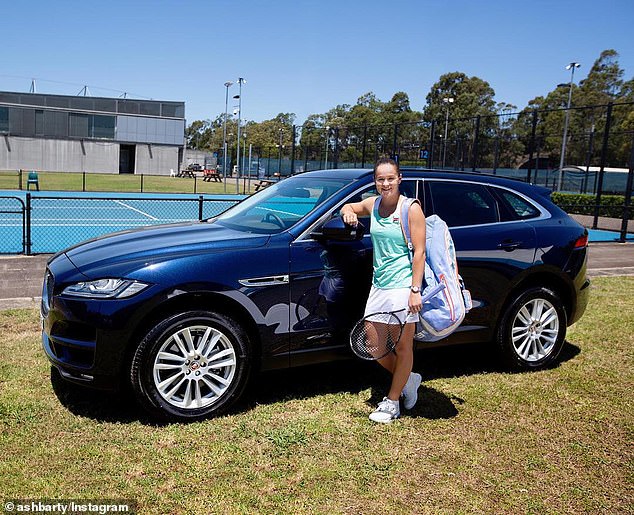 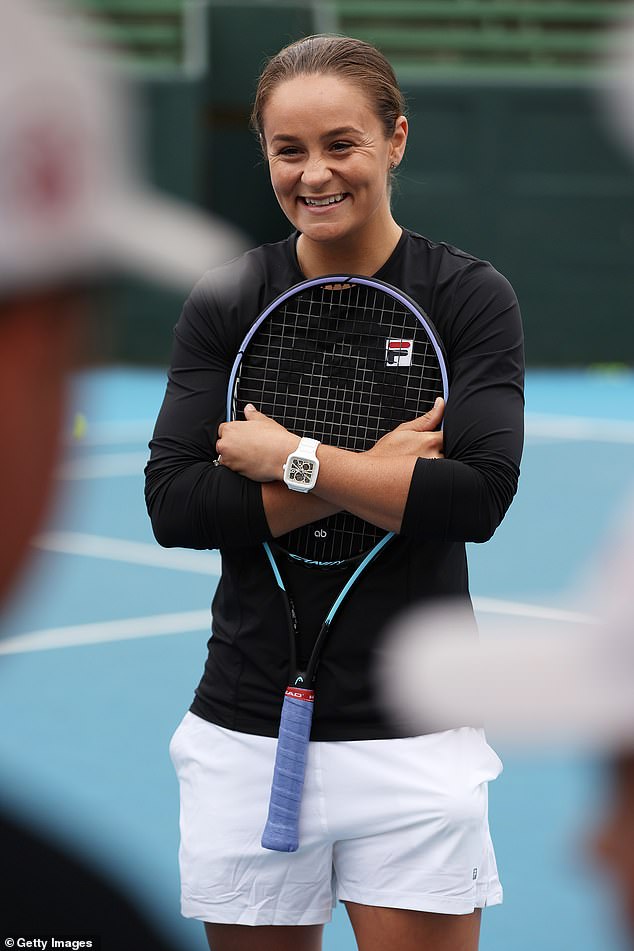 Barty’s  career prizemoney of over $32million is believed to make her the 14th highest paid woman tennis player of all time. 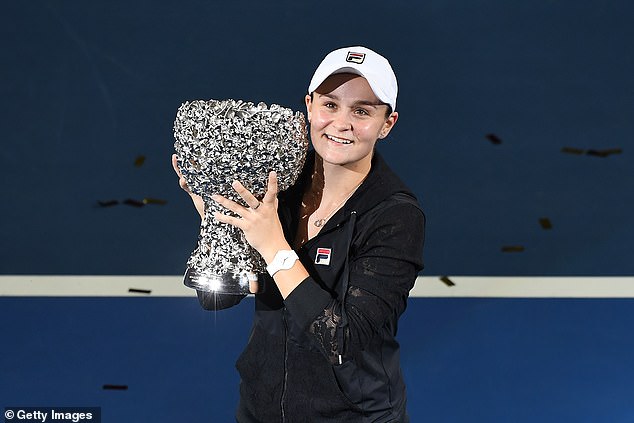 Barty’s winnings are believed to make her the 14th highest paid woman tennis player of all time.

She is also the highest-earning Australian tennis player ever – well ahead of her male contemporaries.

Lleyton Hewitt and Sam Stosur each made around $28million in their long careers, Rafter made around $15million.

Nick Kyrgios has so far made $12.5million and Bernard Tomic around $8.4million. Dellacqua has won $5.6million. 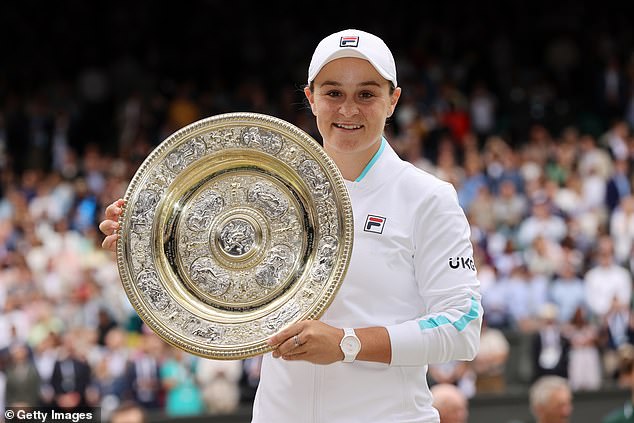 Barty’s Wimbledon singles title in 2021 came in the middle of a long run as world number one, the fourth-best winning streak ever in women’s tennis 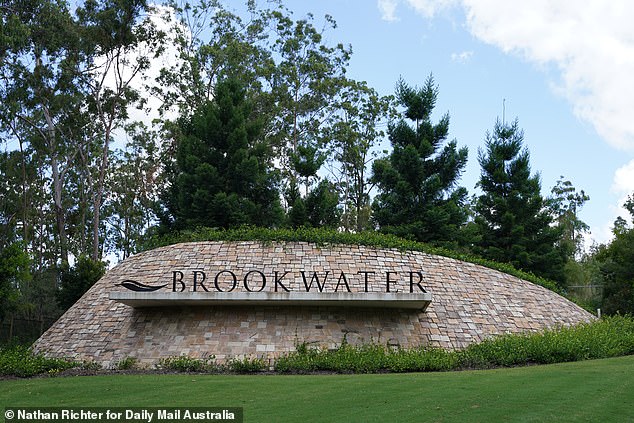 Houses at the Brookwater Estate, in Brisbane’s west, have been snapped up quickly by eager buyers the past few years 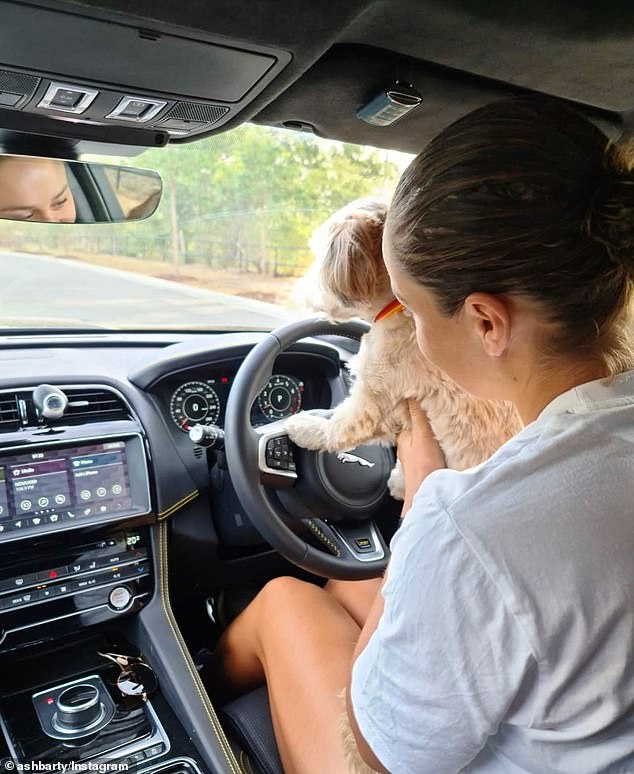 Despite her wealth, Barty has remained down to earth, stating she is happiest when with her partner Garry and their dogs

There will be plenty of speculation that Barty could later reverse her decision and add to her fortune, especially as she is so young to retire and has quit the sport before.

Barty took an indefinite break from tennis in 2014 and played cricket for the Brisbane Heat.

Barty has been hot property for tennis and lifestyle brands for many years.

She hit the radar as marketable figure in 2011 when she won the Wimbledon Girls’ Singles title at the age of just 15.

Barty cracked the women’s racking the top 20 in 2017 – the ranking at which players are more attractive to brands because they feature in the final stages of international tournaments. 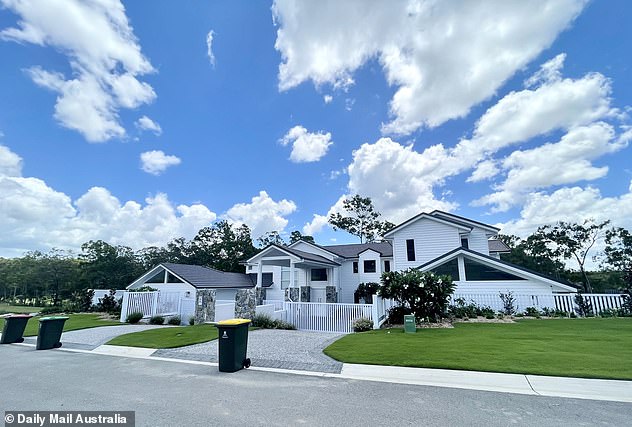 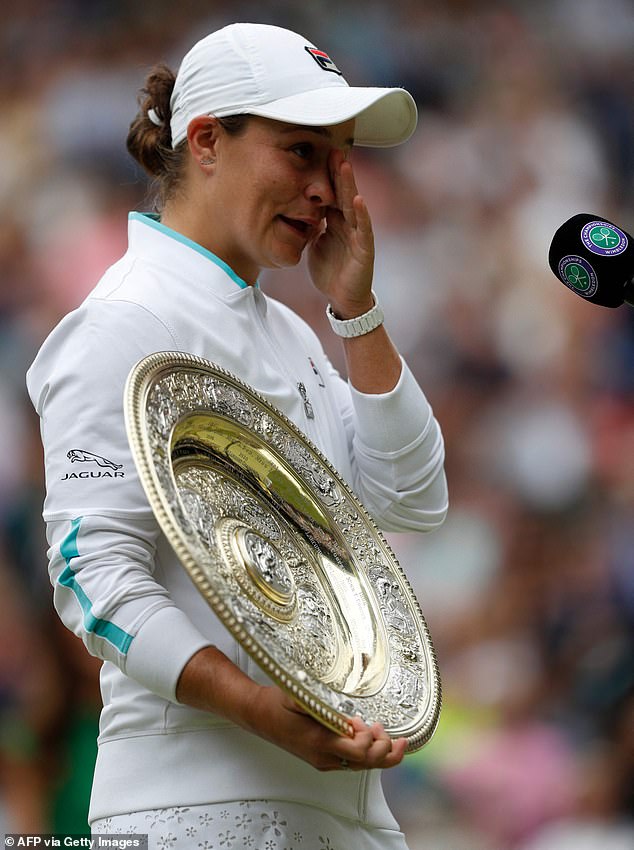 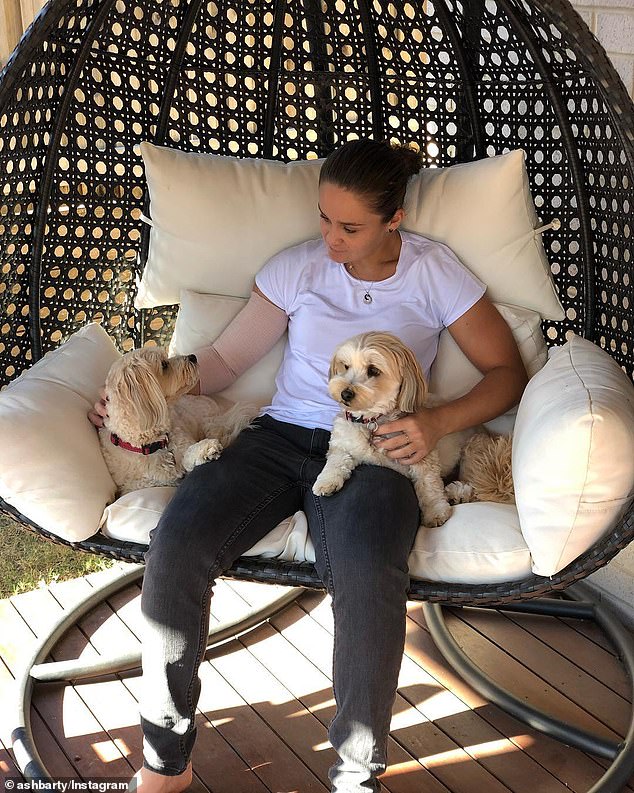 Barty was a junior tennis prodigy and toured the world, but became disillusioned and quit the sport in 2014. She quit again this week