Skip to content
HomeWorld NewsWhy is there a ball in Guinness cans?

INSIDE your Guinness can lurks a secret – a tiny plastic ball that makes sure the iconic creamy head is achieved.

Called widgets, these plastic balls blast the stout beer with nitrogen gas to aerate the head, making your Guinness taste as though it was just poured fresh from the tap. 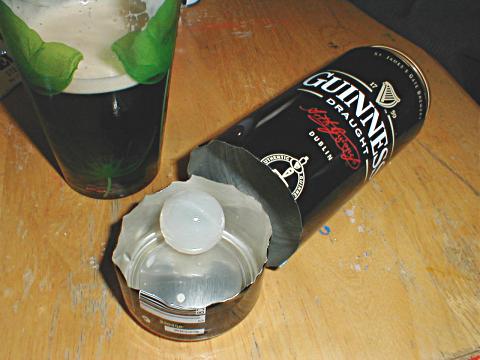 Why is there a ball in Guinness cans?

Nitrogenisation is the key to making a beer that’s rich and creamy, with a smooth texture.

According to the Guinness website, Guinness pairs nitrogen gas and carbon dioxide when the beer is poured in pubs on draught, to balance out the texture.

This is hard to replicate in a can so for Guinness served in cans, little white balls called widgets are used, to blast the stout with nitrogen gas.

While these widgets are spherical in the Guinness can, they are shaped like rockets in bottles.

How does the Guinness ball work?

The Guiness ball is a hollow, spherical piece of plastic with a tiny hole in it.

It looks a little like a mini ping pong ball, Business Insider says.

In bottles of Guinness with widgets, the device is more like a rocket, and is around three inches long.

Brewers add pressurized nitrogen to the beer during the canning process, which trickles into the widget’s hole – along with a little bit of beer.

The whole can is then pressurized.

This process makes the nitrogen inside the widget squirt into the beer, creating a burst of tiny nitrogen bubbles that rise to the top of the beer.

This creates the thick, creamy head like the one on a Guinness you’d be served in the pub.

Are you supposed to shake Guinness in a can?

According to the Guinness website, Guinness bottles or cans should be chilled for at least 24 hours before serving.

Once you crack the cap or the tab, tilt the glass and bottle towards each other and pour the beer in one single go.