Skip to content
HomeWorld NewsWorld's new oldest man, 111, has a cheeky message for Her Majesty

‘I don’t need another card from the Queen – she’s got enough trouble with Harry!’ World’s new oldest man, 111, who retired 55 years ago has a cheeky message for Her Majesty having lived through five monarchs and 26 PMs

Bob Weighton is spry, beady, dryly funny and has better hearing than me.

He pops down to Waitrose, does his own cooking, reads avidly, writes poetry, makes furniture and ornaments out of recycled materials, is well-versed in current affairs and has only recently given up his ecological column in Church News.

It’s a title he has held for just a few days — ever since Chitetsu Watanabe, previously the world’s oldest man, died in Japan on Sunday — and he is feeling rather low-key about it. 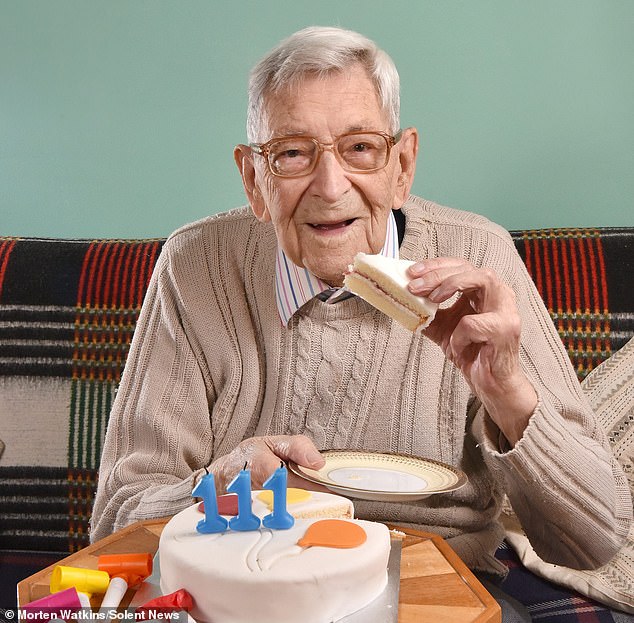 Bob Weighton was around for the sinking of the Titanic, the Queen’s Coronation, the introduction of television, the invention of the internet, the explosion of social media and what he calls ‘all that gender hoo-ha’. ‘I can remember so many events in history,’ he says

‘It’s just one of those things,’ says Bob, when we meet in his cosy, book-filled flat in Alton, Hampshire.

‘For me to become the oldest, someone else had to die, so you can hardly call it a joyous occasion.’

‘We never met, but we sent each other Christmas and birthday cards,’ says Bob.

‘We had a real bond.’ A couple of years ago, on their 110th birthdays, a news team filmed them waving hellos to each other from their respective sitting rooms. 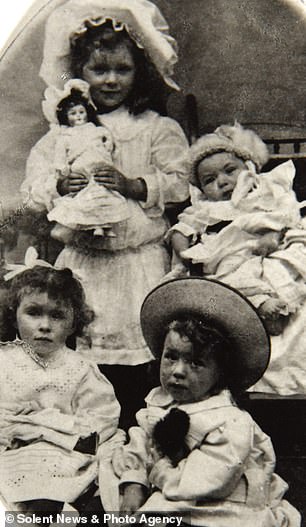 A life well lived: Bob (back right) in his first portrait in 1908

Now there’s just Bob left, looking, well, anything but 111. (Coincidentally, Bob shares the title of Britain’s oldest person with Joan Hocquard, from Poole, Dorset, who was also born on the same day — March 29, 1908.)

His body might be creaky but his white hair is thick and springy, his eyes sharp, his voice, strong and deep — ‘I’ve always spoken very clearly’ — and his memory robust.

‘I don’t really know why it’s me,’ he says of his new title. ‘It’s not something I ever intended, wanted or worked for. I suppose the trick is just to avoid dying.’

That is something he has done very adeptly through five monarchs, 26 Prime Ministers, two World Wars, a 60-year marriage to his beloved Agnes, three children, ten grandchildren and 25 great-grandchildren.

He was around for the sinking of the Titanic, the Queen’s Coronation, the introduction of television, the invention of the internet, the explosion of social media and what he calls ‘all that gender hoo-ha’.

‘I can remember so many events in history,’ he says. ‘And I was forced to participate in some of them.’

Over the years, he has also learned a few key lessons. That laughter is far more precious than possessions. That friends and family are everything.

That youthful ambitions often wilt and pall with age and stop mattering so much. That money isn’t the route to happiness — ‘I’ve never really earned much money, but I can’t think of anything I wish I’d been able to buy.’

And that, thankfully, the self-absorption of youth evaporates.

‘When you’re young, you think everything revolves around you. I’ve learned through hard experience to forget myself and think more of other people.’ 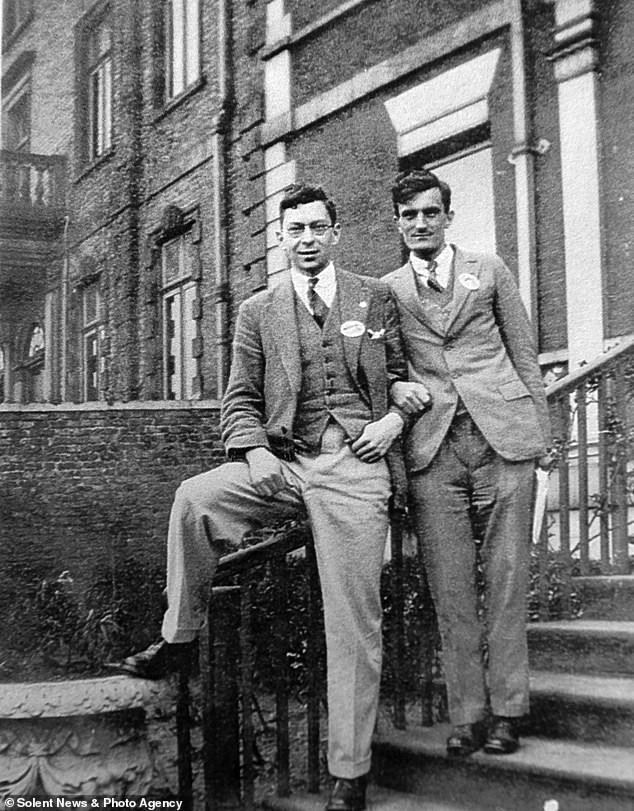 Bob (left) with Reg Mobbs at the Easter Youth Conference in Whitby in 1933. When he qualified in 1925, the shipping industry was in decline, so in his mid-20s, he moved to Taiwan to teach English

Which is perhaps why, despite his extraordinarily advanced years, there is just one birthday card from the beaming Queen on display in his packed bookshelves. Naturally, she sends one every year to those over 100.

‘The first one was satisfying — I wouldn’t say it was exciting,’ he says.

‘But after a couple, I said: ‘Yes, I’m still here, I’m still alive,’ and I asked Her Majesty to stop sending them.’

‘Because it would be a waste of taxpayers’ money and she’s got enough on her plate with Harry and . . . what’s she called? And also I don’t need a load of cards cluttering the place up.’

Robert Weighton was born in Hull in the year production of the Model T Ford began.

He was the middle of seven children to a Scottish vet who, unusually for the times, insisted his three daughters had access to the same further educational opportunities as his sons.

‘Nobody imagined bombs coming from the sky. There were no preparations, no defences, so we all hid under the dining room table on blankets’ he says.

Bob was an awkward boy. Shy, self-effacing and earnest. He tried hard at school — ‘I was average, not brilliant’ — dreamed of becoming an engine driver and trained as a marine engineer.

When he qualified in 1925, the shipping industry was in decline, so in his mid-20s, he moved to Taiwan to teach English.

It was in Birmingham, on the course to prepare for the move abroad, that he met Agnes. It was not quite love at first sight — ‘I fell for her within months,’ he says.

Unfortunately, she was destined for a school in Ghana and Bob was off to Taiwan on a seven-year stint. But they wrote regularly and four years later she joined him.

They were married in Hong Kong in 1937. ‘She was just lovely. I wouldn’t say she was the most beautiful person in the world because that wouldn’t be true, but we got on very, very well,’ he says. 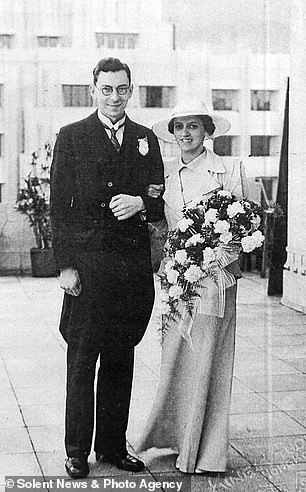 Agnes and Bob were married in Hong Kong in 1937. ‘She was just lovely. I wouldn’t say she was the most beautiful person in the world because that wouldn’t be true, but we got on very, very well,’ he says

They were on a ship to Hawaii with their young son David, en route home to England, when Hitler invaded Poland and the Navy immediately requisitioned all ships for the war effort.

They were stuck in Canada for the duration of the war, he says. ‘We had nothing, no money, no home, just our suitcases — we were refugees.’

In Toronto, they were housed, clothed and fed by the kindness of strangers.

Eventually, Bob was contacted by the British Ministry of Defence and asked to work in the North American aircraft factories that were supplying the war effort.

And after the Japanese bombed Pearl Harbor, he was recruited by the British Political Warfare Mission to decode Japanese military communications as well as send miscommunication back to disrupt them.

He was shunted from city to city — often away from Agnes and their three children for months on end.

‘It was hard,’ says Bob. ‘We had some difficult times — long, long periods of separation and still no money.’

But they came through and, six years later, finally made it home to England where, once again, they had to start afresh, with no home and no base.

He toured the country giving talks about life in Taiwan and Japan, while Agnes and the children lived with her parents in Cornwall.

But eventually he secured his dream job as a lecturer in marine engineering at what is now London’s City University and, finally, the whole family could be together in a new life in Hatch End, on the outskirts of the capital.

After Bob retired, 55 years ago, both volunteered with youth groups and as marriage counsellors. ‘We were very happy,’ he says.

Of course, the downside of living such a staggeringly long life is that you outlive all your nearest and dearest.

Agnes passed away in 1997, aged 90. All six of Bob’s siblings are long gone — the last died over a decade ago. But he insists he is never lonely.

‘That would be absolutely impossible,’ he says firmly. ‘I know far too many people who all want to come and see me.’

Of course they do. He is superb company: dry, funny, crisp and precise. When I ask him if he’s a fan of the Queen, he retorts: ‘I’m not a fan of anything if being so requires unconditional commitment.’ And then confirms that he admires her greatly.

‘She does a job that not in the world would I ever want to do, and it’s evidently proved a bit too much for Harry!’

He is similarly brisk when I ask about his favourite Prime Ministers over the years.

‘Certainly not the present one!’ Churchill was ‘the right man in the right place at the time’. Thatcher, he was less keen on.

‘I know it’s childish, but I couldn’t stand her girls’ posh school accent.’

Today he still reads avidly, always non-fiction — ‘I read all the fiction I wanted to when I was younger’ — and has recently had a collection of his poems published for charity.

He listens to Classic FM, watches the news and Countryfile — ‘It is sensible, informative and the people are all extremely likeable’ — and is still pining for something to fill the hole left by his favourite comedians Morecambe and Wise.

Bob neither drinks nor smokes. ‘I tried one of my brother’s cigarettes when I was 12, was sick and I’ve never smoked since,’ he says.

There have been health scares over the years. Malaria in Taiwan, the odd trip to hospital and, 20 years ago, a malignant tumour the size of his fist was removed from his stomach. ‘And here I am. Still alive!’ he says.

Recently, he has finally started to notice his age. ‘The last year, things have gone south a bit,’ he says. 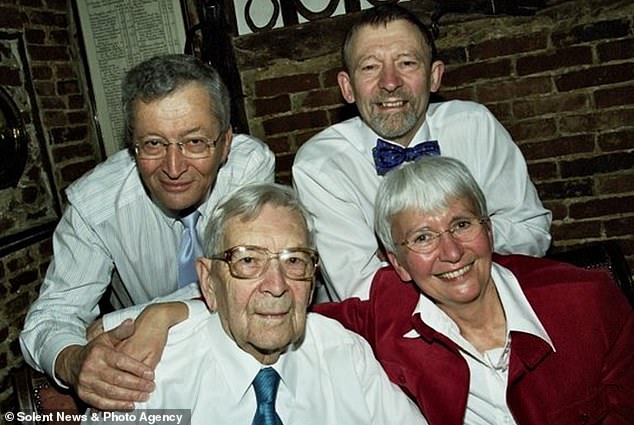 Bob’s 100th birthday with his children Peter, David and Dorothy in 2008. All six of Bob’s siblings are long gone — the last died over a decade ago. But he insists he is never lonely. ‘That would be absolutely impossible,’ he says firmly

‘I can’t boast I’m completely relaxed about it, but I’m reconciled to the fact things are changing.’

There have been a couple of falls. He is finally contemplating lunches at the care home across the road rather than beetling off to Waitrose, and he thinks his days of woodwork are nearly over.

But while he worries about the planet, the coronavirus, our current Government and young people’s addiction to screens — he is happy with his lot.

‘I’ve had some rude shocks and some unfortunate situations to cope with,’ he says, ‘and I never did get to drive a train. But I’ve had a happy life. On a scale of one to ten, I would say I am seven out of ten on contentment, which is pretty good. And realistic.’

In a society increasingly obsessed with living longer and longer, we sometimes forget that there’s little point in making it to 100 if you’re not able to really enjoy life.

Bob, however, has got it nailed. So I ask for his tips on a good, long life and he replies in a flash.

‘Laughter is absolutely essential. People without a sense of humour, who are too wrapped up in themselves . . . I can’t get on with that at all,’ he says.

‘Oh, yes, and never buy anything that you can make yourself, especially out of something that somebody else has thrown away.’

What a man. What a record holder. What a role model.